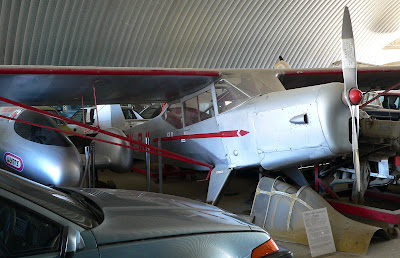 To escape the heat and the dust at Wanaka on Saturday I waddled into the Wanaka Transport and Toy Museum - cost me all of $10 - which was better than $77 for the airshow.
(Why did they charge $77 when it was advertised for $75? ).
The Museum has an assortment of aeronautical bits and pieces.
Above is the Auster J-1 Autocrat ZK-BJL (c/n 2327). This entered our register in early 1955 and had about nine private owners. The last two being Tom Middleton who had it at Rangitata and then Gerald Rhodes - the Museum founder from 26-05-1992. Its registration was revoked by CAA along with several other of the Museums aircraft on 19-05-1998. 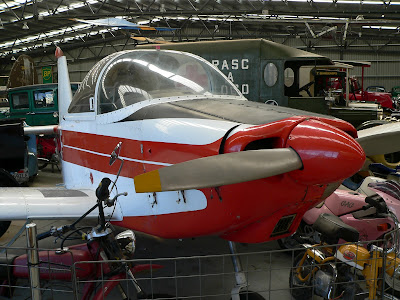 They have two Victa Airtourers. Above is ZK-CLF (c/n 121) in its V115 status. I killed a few bugs with this in its days with the Wellington Aero Club between 1965 and 1968. Gerald Rhodes acquired it on 16-04-91 from the Wigram Aviation Sports Club Inc. It is still currently on the NZ register.

Not so pretty is V115 ZK-COW (c/n 166). This one started out with the Waikato Aero Club in May of 1967. This airframe had reached an advanced stage of construction in Australia before being shipped to NZ and completed by Victa (NZ) Ltd. Anyway, it was eventually purchased by Topflite Aviation of Rangiora but it was found to have major corrosion in its internals. It ended up with Gerald Rhode still with numerous outer panels missing, and now sits out the back more or less out of view. 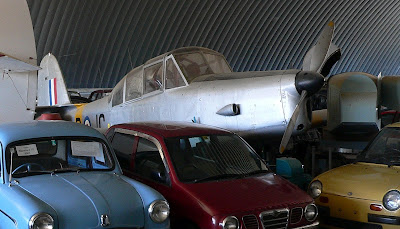 The Percival P.40 Prentice T1 ZK-DJC (c/n B/3/1A/PAC/252) was actually built byb Blackburn for the Royal AIr Force with whom it had the serial VS316. It soon entered the UK civil scene as G-AOMF. Its main claim to fame, I guess, is its flight from the Channel Islands to NZ between March and May of 1969. It was stored at Tauranga for a while and was then certified as ZK-DJC for N B Cooper on 29-11-1972. It was later acquired by Gerald Rhodes and now rests here between the AN2 and a Link Trainer.

The AN2 is LY-AKH (c/n 1G16037) which had an interesting ferry flight to NZ some years back by Neville Cameron.
Posted by Dave Paull at 21:47