Our next type of single seat homebuilt aircraft was the Aerosport Scamp, of which we have had 3 in New Zealand to date.

The Aerosport Scamp was designed by Harris Woods who also formed Aerosport to market his homebuilt aircraft designs.  (Harris Woods also designed the Woody Pusher, but that is another story).  The prototype Scamp first flew on 21 August 1973 and more than 1,000 sets of plans have been sold worldwide.  Interestingly it has been developed in Colombia as a crop sprayer as the Agricopteros Scamp B.  Can anyone supply a photo of one? 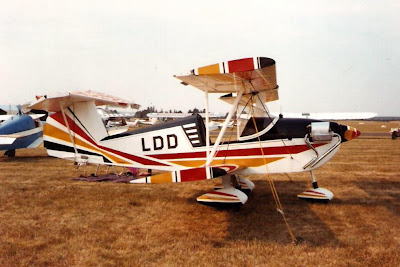 Our first Scamp was Lionel and David Dixon's ZK-LDD (c/n AACA/572) which was built in Auckland.  It was first registered on 7/5/81 and it first flew at Ardmore on 11/5/81.  I remember that this aircraft was built very quickly at the time.  It was damaged in a forced landing at Drury on 25/7/82 when I think it force landed on the motorway median strip.  The above photo was taken at the 1982 AACA flyin at Taupo.  It was cancelled on 6/1/83 and stored. 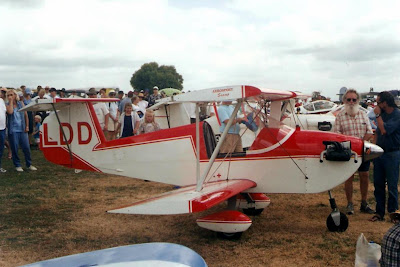 The damaged aircraft was purchased in 1993 by Les Worsley of Rotorua, who rebuilt the aircraft with a 2100cc VW engine and re-registered it on 11/8/95.  It first flew again after the rebuild on 20/2/98 at Stratford.  It is photo'd here at the 2000 AACA flyin at Matamata. 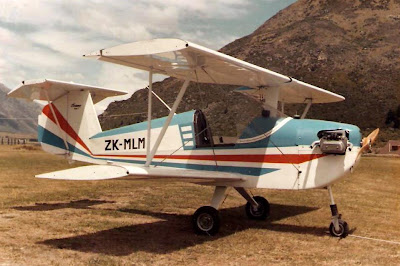 Our second Scamp was ZK-MLM (c/n AACA/470), which was built by Parker Mudge at Queenstown, and was first registered on 19/3/82.  The above photo was taken at Queenstown in early 1986.

It was sold to S D and R L Guy of Waimate on 20/4/97, and it crashed on landing at Oamaru on 25/8/97 (not totally sure of the date).  Like ZK-LDD it was stored and then the damaged aircraft was purchased for rebuild, by K W Langford of Christchurch.  It is currently under rebuild at Ashburton. 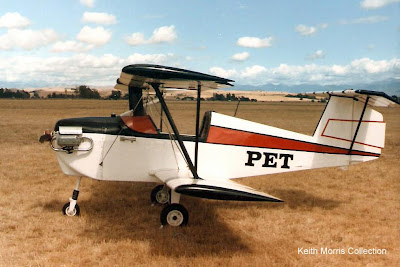 And our third Scamp was Tony Whitehead's ZK-PET (c/n AACA 460) which was first registered on 13/2/86 at Auckland.  It was the first aircraft to be registered in New Zealand under the Experimental category.  The above photo was taken at the 1987 AACA flyin at Omaka.

It had an accident on 4/3/89 when it ran of the airstrip at Glen Murray and overturned. 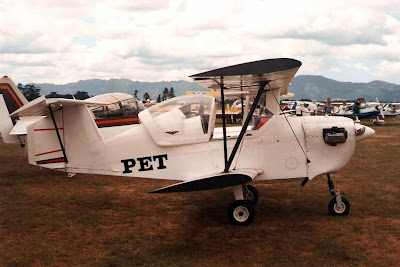 Tony Whitehead rebuilt ZK-PET as in the above photo taken at the 1996 AACA flyin at Matamata, now with a canopy and raised turtle-deck.  It was re-designated as a Class 1 microlight on 27/2/01, and finally it was withdrawn and cancelled on 12/8/11.