A Surprise at Whananaki yesterday

A surprise arrival at the Northern Aviators Club's flyin at Whananaki yesterday was Mike Crene's Titan T 51B Mustang ZK-DBG2.  It was a long way from its base at Feilding. 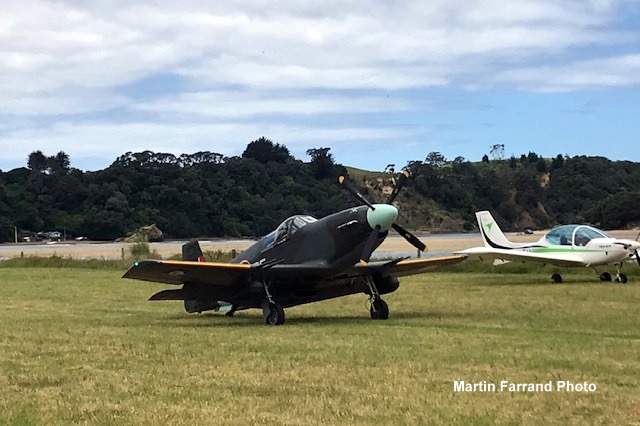 It was fitted wing drop tanks under the wings - I wonder if they carry fuel for extra range?
Thanks for the photo Martin. 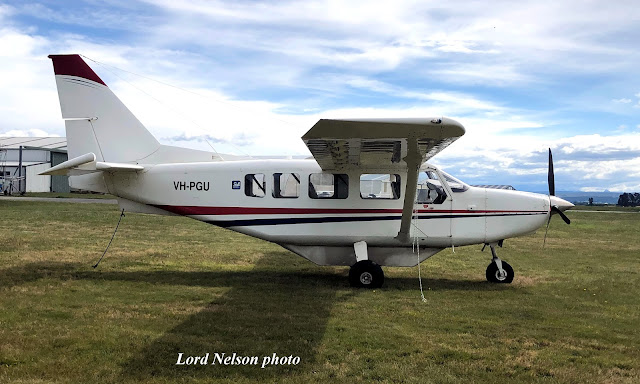 It has also been noted at Wellington and Blenheim.

Northern Aviators Club president Martin Farrand hosted the possibly last New Zealand flyin of the year at Whananaki (on the East Coast North of Whangarei), today.  The location is great and the weather was helpful with the wind right down Runway 21, and a good turnout of different types of sport aircraft attended.  Rusty Russell flew up from Whangarei in his MT 03 Eagle autogyro and he took these photos: 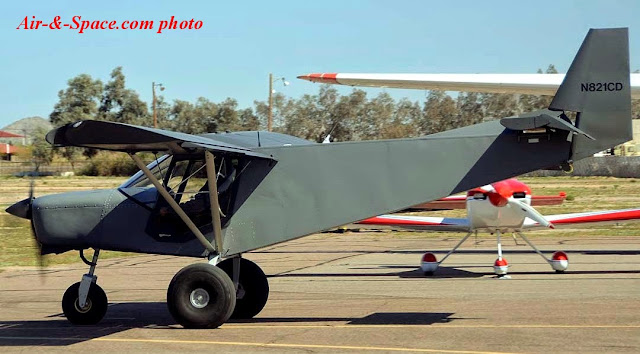 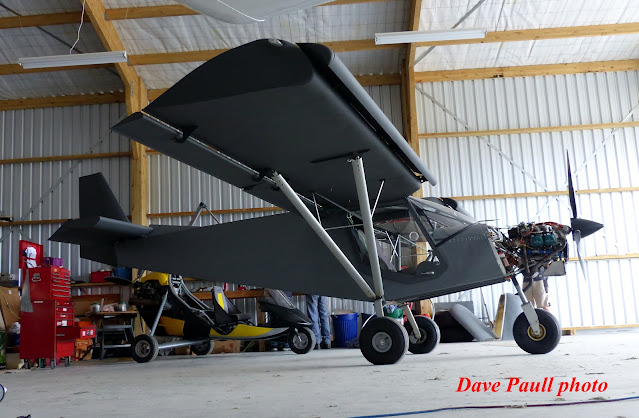 It was listed as ZK-AMC2 on 14-01-2015 to Alex and Richard Mason of Rangiora.
Its markings were applied two days later. 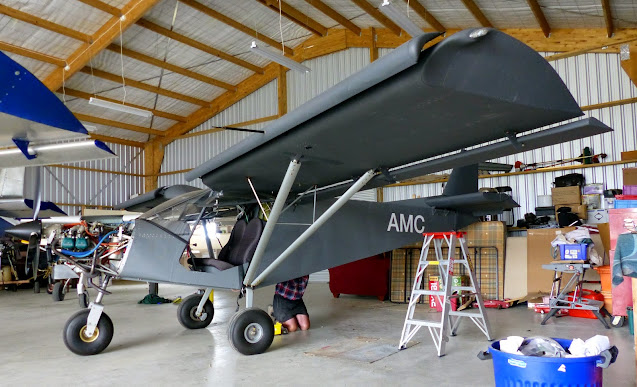 Photo above was shot on 16-01-2015 with the "AMC" markings not yet dry.
That's Richard with his head in the bowels of the Grey Ghost. 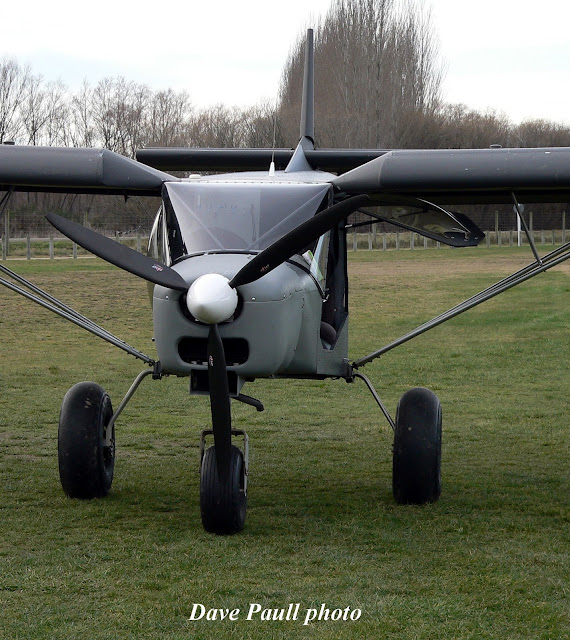 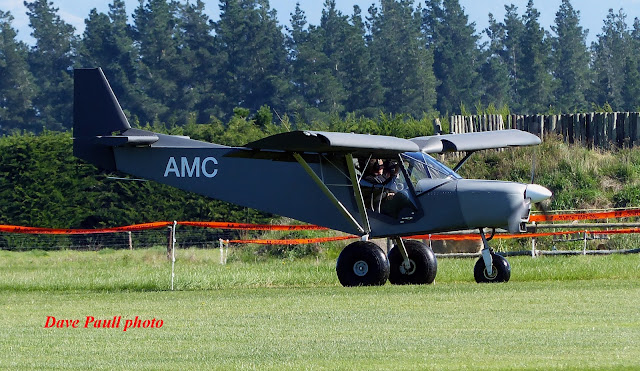 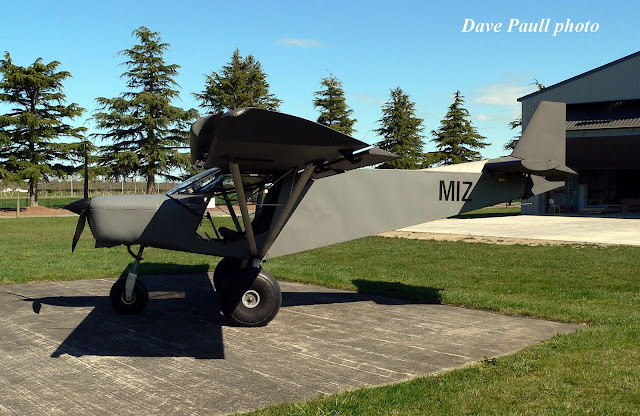 Visiting Pauanui today was the Tauranga based 1976 model PA31-325 Navajo CR ZK-ECQ in a smart new paint scheme.    Originally imported from Australia in 1995 it has been with its current owner, Dairy Tech International, since 2014 and its new colours match the company's Aztec ZK-DGT. 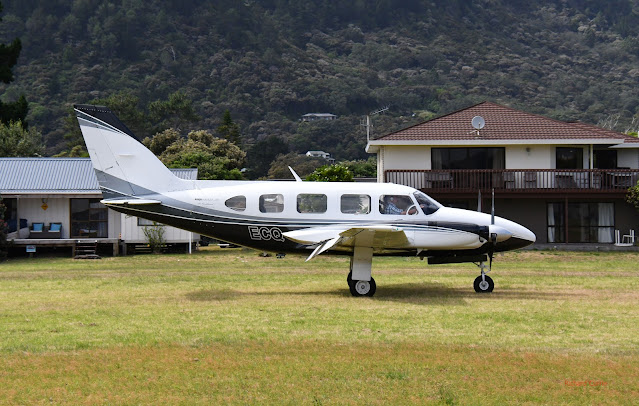 Another interesting helicopter currently listed for sale on Trade Me is the Argentinian built Cicare SVH-4 ZK-HZV3.    Built by Cicare SA in the Buenos Aires province of Argentina it is a conventional helicopter attached to a mobile ground platform.  This allows the use of all flight controls including lift off to a normal hover at 3ft AGL and hover taxiing.    Powered by a Rotax 912 it is registered with NZ CAA as a "trainer aircraft" to T C Pike of Waimauku. 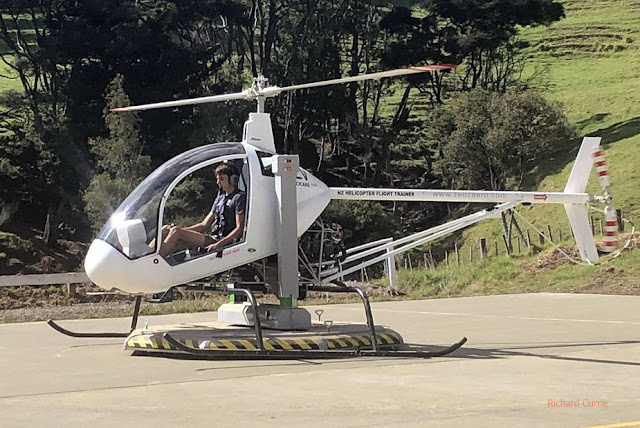 Post Xmas the activity at Pauanui airfield has ramped up and amongst these was the 1972 model Piper PA32-260 ZK-DEF from New Plymouth, featuring a smart new paint scheme.  This has been with its current owner since mid 2020. 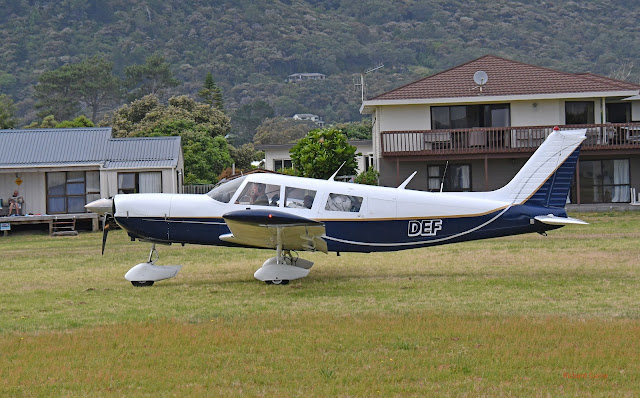 And the appropriately registered Aeroprakt 22LS Foxbat ZK-FXB2 which is registered to the local agents, Foxbat NZ Ltd.   This was imported from Australia in 2017. 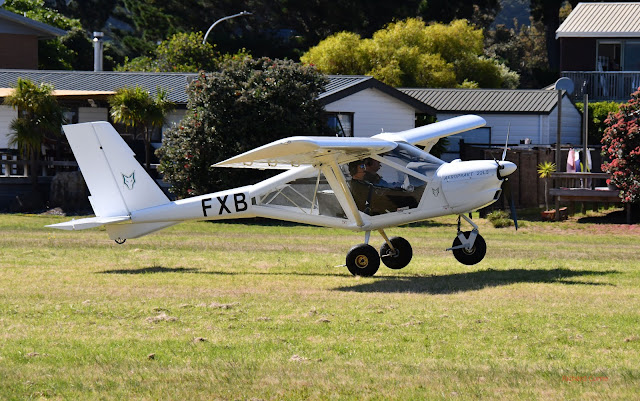 One of 2 Revolution Mini 500 kitset helicopters currently on the NZ register is ZK-HXH4 which was registered to Havelock owner, Tomino Cacciamani back in 2016.    Currently undergoing certification test flights it is listed for sale on Trade Me. 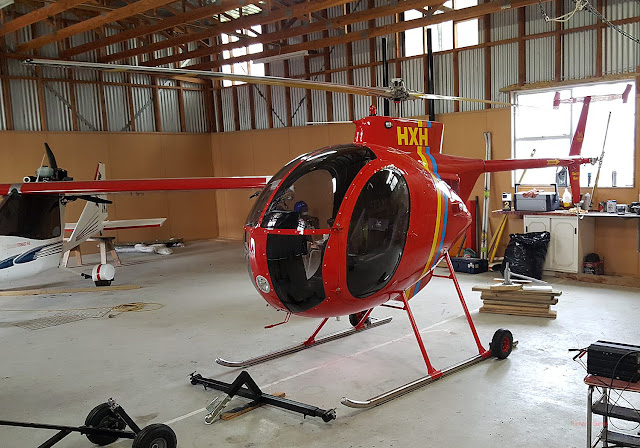 Update on Cessna 185A ZK-CBS

Jordan Elvy was at Paraparaumu airport on Christmas Eve and photo'd the venerable Cessna 185A ZK-CBS.  As there has been recent posts on this aircraft I thought I would post it in its most recent iteration with Patchett Ag Air titles: 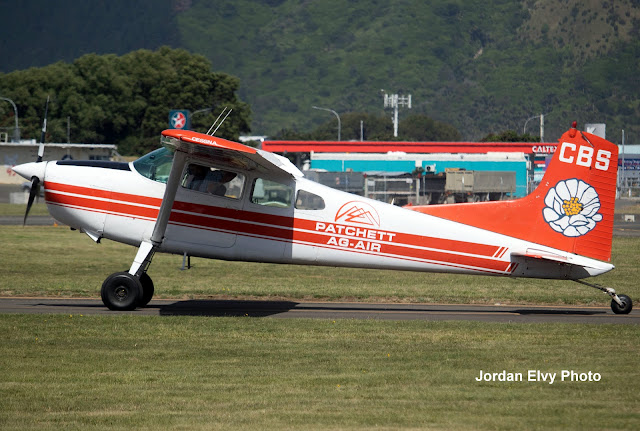 Thanks for the photo Jordan.

Aaron Murphy reports from Christchurch International.
On the Tie downs near the Canterbury Aero Club was the Cessna 182T Skylane ZK-PJC c/n 18281476 which has been listed with Europac XP Ltd since March of 2017. 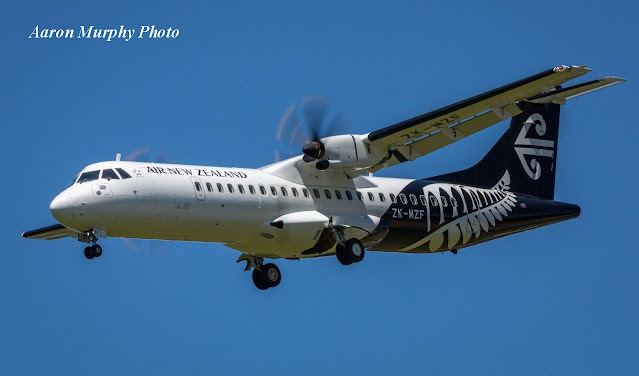 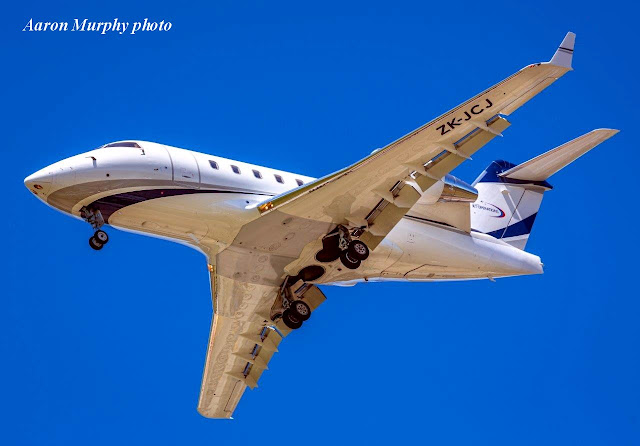 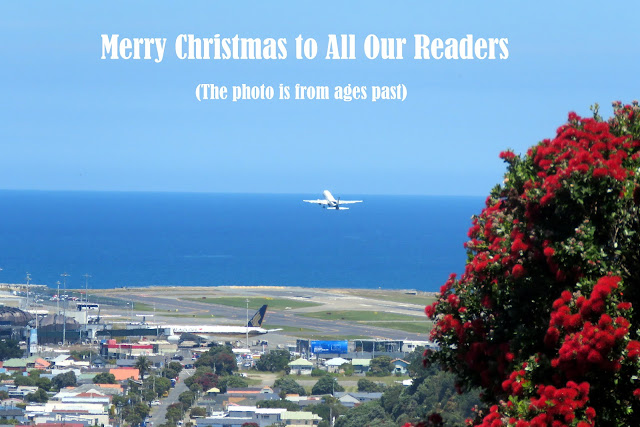 An interesting visitor to Pauanui today was the Te Kowhai based Piper PA32R-301 Saratoga SP N100NA.    Built in 1980 this arrived in NZ earlier this year and is currently registered to a Trustee company in Suffolk, UK. 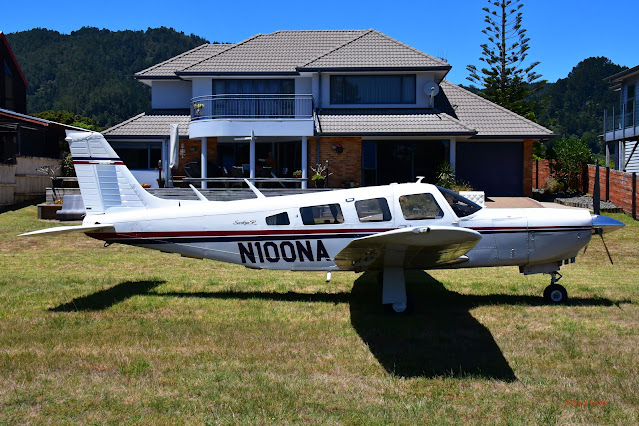 This week has seen the arrival of some of the regular summer holiday residents at Pauanui including the Pukekohe Flying Group's 1977 model Cessna 172N ZK-ELY2 in a smart new colour scheme.  This was imported from the US in 2007. 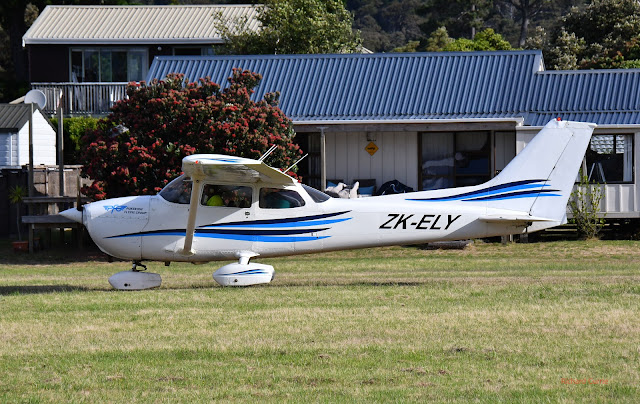 Up from Nelson is the 1974 model Beech C23 ZK-DVC still wearing its Abel Tasman Air script. 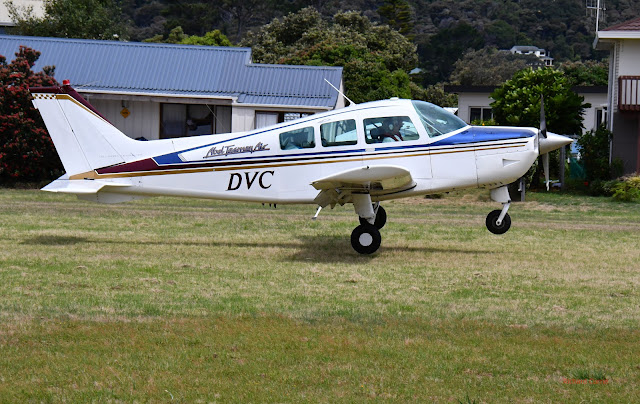 As our thoughts turn to 2022, why not also look a little further forward to 2023?  This first newsletter for Classic Fighters 2023 gives a taste of what we will have to look forward to, and it will be a lot!