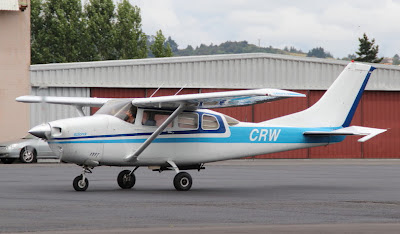 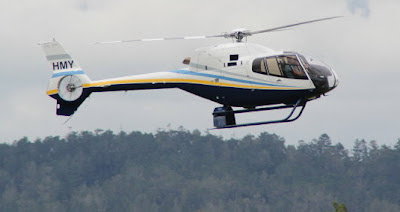 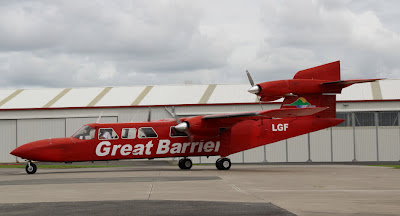 Posted by MRCAviation at 20:46 No comments:

The Auckland Aero Club's Cessna 162 Skycatcher ZK-AAC was out catching rain drops as the afternoon downpours that have punctuated the regions summer continued to build-up! 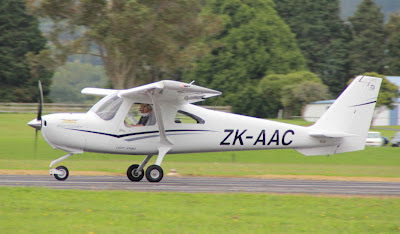 And arriving just as the heavens opened was locally based Piper PA25-235 ZK-JWW with the owners Harvard, ZK-WAR following soon after and his Cessna 180K ZK-EOH sitting outside waiting to be put back under shelter from the elements. 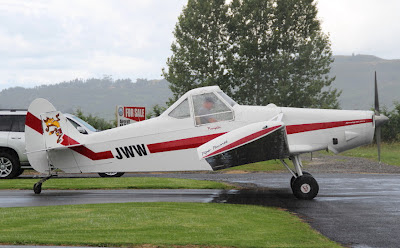 Posted by MRCAviation at 20:22 No comments:

Bolkow MBB BO105 ZK-HAX, registered to Oceania Helicopters in August 2011, was noted outside their hanger at Ardmore 28 February.  This, along with three other examples, were picked up from the Dubai Police Air Wing.
It is understood ZK-HAX is operated on behalf of Greenpeace and a small snippet on TV news Monday night showed a BO105 overflying Greenpeace activity at the Port of Taranaki.

Following from Blue Bus's excruciating Question Time 146 about Charlie Stanton's Sunbird motorglider ZK-JEA (which used parts from his American Eaglet ZK-GOE), I thought I would post about American Eaglets in New Zealand.

The American Eaglet is a self-launching ultralight sailplane that was designed for kit building, by Larry Haigh. The first flight of the prototype was on 19/11/75. It is truly ultralight with an empty weight of only 160 pounds (90 Kg) and it can carry a 200 pound payload. Its length is 16 feet (4.9 metres) and its wingspan is 36 feet (11.0 metres). It has an aspect ratio of 18:1 and a maximum glide ratio of 24:1.
It also features a McCulloch MC 101 go kart engine of 15 HP, with a folding propellor (but I do not know what engines were installed in New Zealand examples).
There have been 5 American Eaglets in New Zealand, as below. The photos are from the Keith Morris collection unless otherwise noted. 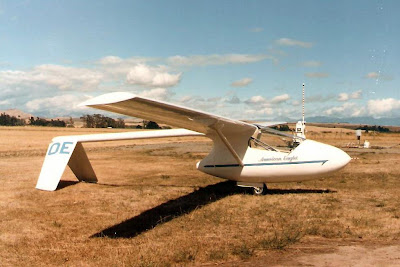 ZK-GOE (c/n AACA/641) was built by Charlie Stanton of Nelson and it was first registered on 10/6/86. It was cancelled on 15/2/92 and as noted above parts were used in Charlie's later Sunbird motorglider ZK-JEA. The photo was taken at the 1987 AACA flyin at Omaka where it was on static display without power. 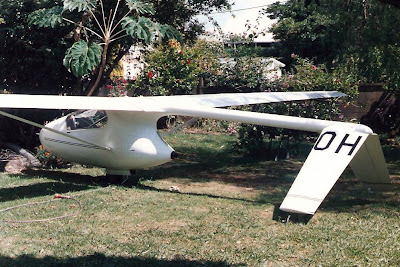 ZK-GOH (c/n A591) was built by JL Williams on the North Shore of Auckland, and was first registered on 24/8/87. It was withdrawn for use and cancelled at Auckland in 8/95.
ZK-GOJ (c/n AACA/678) was built by D Visser of Auckland, and was first registered on 3/8/87. I think it and ZK-GOH may have been built together. I have seen a photo of both of them rigged together on the same North Shore lawn, but I do not have a photo of ZK-GOJ. Can anyone provide a photo? It was damaged at Hobsonville on 20/12/87 and was cancelled on 15/9/88. 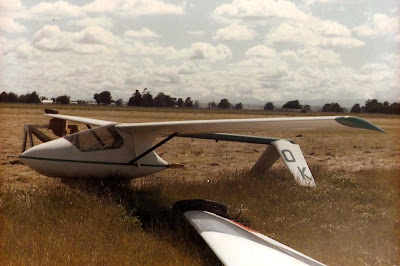 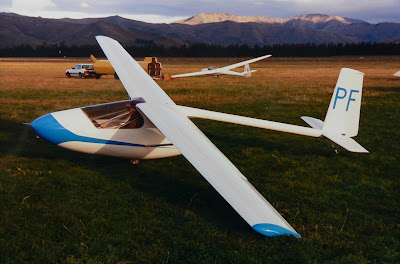 And finally we have ZK-GPF (c/n 365) which was started by Rex Handley of Blenhiem, and was completed by Andy Fairhall of Renwick. It also used parts from ZK-GOE. It was first registered on 23/11/94. As can be seen from the photo it featured a conventional rudder and tailplane, and from other photos it may not have been a motorglider. It was withdrawn and cancelled on 4/9/01. Thanks to Blue Bus for the photo, which was taken at Omaka on 21/5/95.
Posted by Sir Minty at 20:02 1 comment:

Spotted at Ardmore 27 February was this example of the Kawasaki BK117 B-2 ZK-IPT.  It has been registered to Skyline Aviation of Hastings since its arrival in the country during summer 2011 and still bears the corporate colours on the tail, however on the forward fuselage it has "Mt Hutt Helicopters" titles.
Posted by MRCAviation at 22:56 No comments:

Well, following on from another post today http://www.nzcivair.blogspot.co.nz/2012/02/aero-l39-albatros-zk-ccp-on-move.html, L39 ZK-CCP was indeed out and about heading south from Ardmore to its South Island roost via a couple of fuel stops.  What Geoff's photo taken at Paraparaumu doesn't show is the back seat driver!

Man, its a dog's life!!!!!  Rover complete with ear protection!!

Posted by MRCAviation at 22:50 No comments: 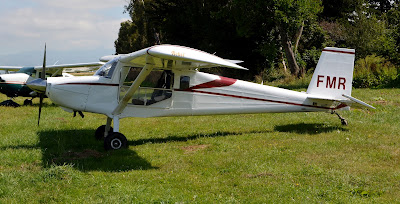 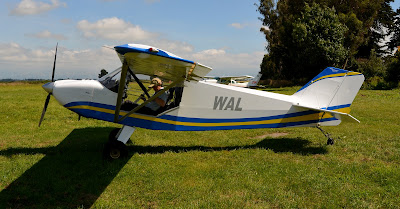 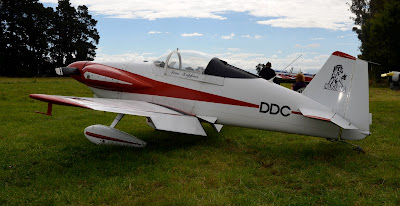 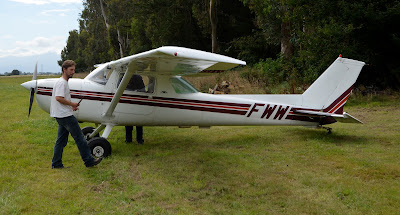 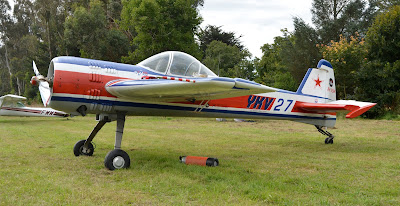 Mark on your calendar the Rangitata Island Autumn Fly - In on Sunday March 18.
As always - everyone is welcome. Hope you can make it.
Posted by Dave Paull at 21:54 No comments: 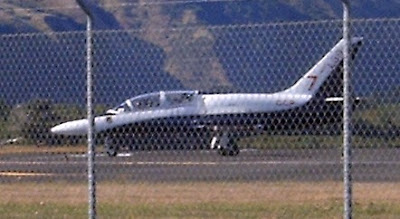 Considering we have a moving aircraft and a moving vehicle I think this shot came out pretty well.
It was shot by Geoff Lloyd at Paraparaumu today (27-02-2012) showing the Aero L-39C Albatros ZK-CCP2 (c/n 332639) seemingly about to commit aviation. It is still listed to the ADT Trust of Queenstown.
Posted by Dave Paull at 20:24 1 comment:

Two Titan T51 Mustangs in for fuel. The nearest one "Hurry Home Honey" is ZK-MPC (c/n M05XXXS0HK0062), which is Marty Cantlon's machine from Tauranga. This is 3.5l Honda powered whilst "Loburn Lady" ZK-MSY (c/n 0035) is the Ivan Campbell example from Loburn Abbey.
[I would guess that the full c/n could read something like M04914S0HK0035]. 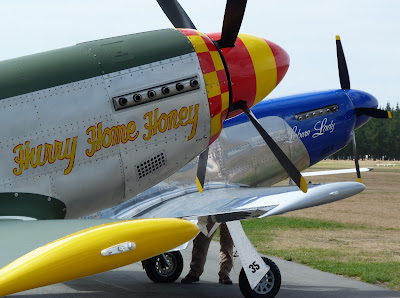 Sir Minty has come good with a couple more shots taken at North Shore this afternoon.

The Cessna 150M Aerobat ZK-DOF (c/n A150M-0529) arrived in NZ aboard the Austral Endurance and registered to Rex Aviation (NZ) Ltd on 14-10-1974 - first flying the next day for delivery down the field to the Rex Flying School at Ardmore. It is now listed with Robert Jago of Auckland.

Some more pics from Allan Bowman taken yesterday 25-02-2012 at Loburn Abbey.
The Fisher R80 Tiger Moth ZK-LAS (c/n 18) with the owner, Ivan Campbell in the back seat. 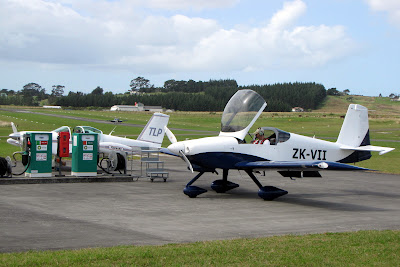 Carl Morgan refuelled his Vans RV 7A ZK-VII before departing North, and Trevor Parker also refuelled his Pazmany PL 2 ZK-TLP. And in the background Stephen Jones' RV 7 ZK-NVS was pounding the circuit. 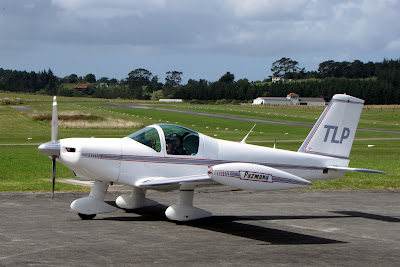 Trevor and Marilyn Parker popped across from Whitianga in ZK-TLP, which is still immaculate after 23 years.
Posted by Sir Minty at 20:15 No comments: 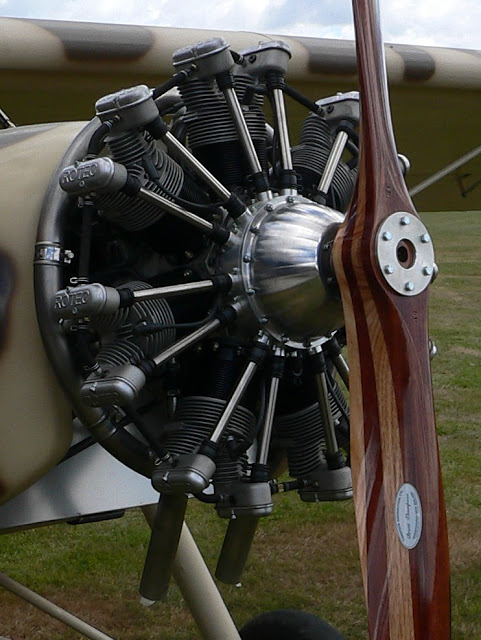 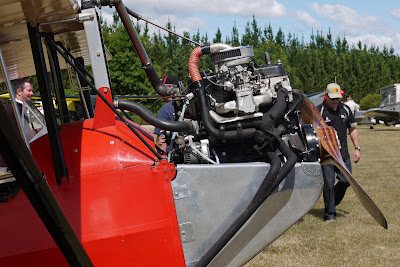 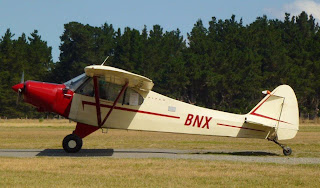 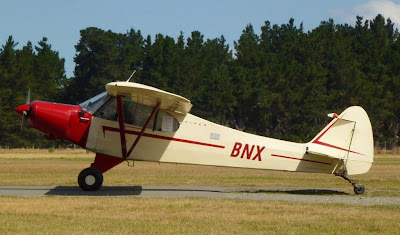 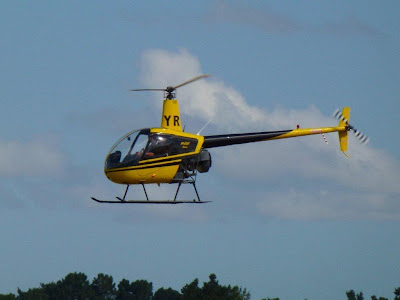 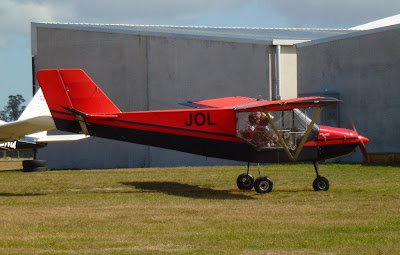 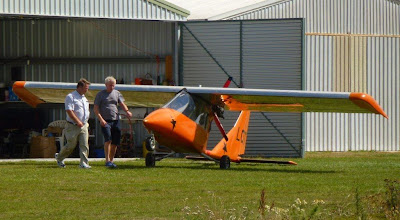 An old favourite at the tie down wire on Christchurch's western grass was Cessna 180C ZK-BYI (c/n 50909) of Papa Juliet Trust from Queenstown.

Three aircraft from the CTC Aviation Training (NZ) Ltd fleet were at the Canterbury Aero Club.
Above is the Diamond DA20-C1 Eclipse ZK-CSD2 (c/n C0387). 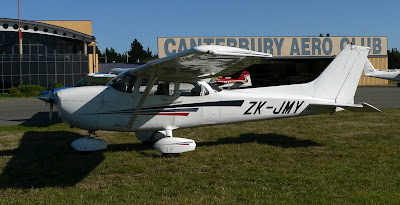 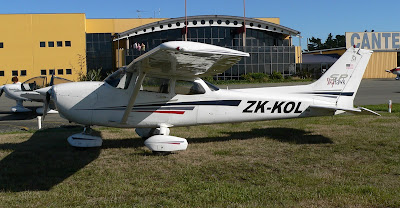 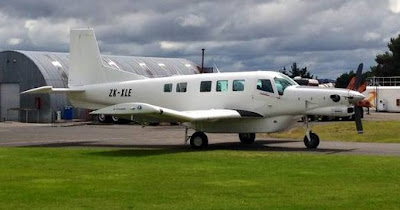 Henry M has sent in this view, taken on his iPhone, of the Pacific Aerospace 750XL ZK-XLE (c/n 151) sitting at Taupo. It is registered to Kiwi Air Ltd of Gisborne.
Posted by Dave Paull at 07:53 No comments: 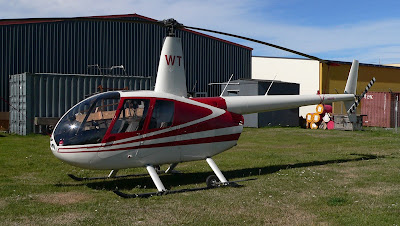 Christchurch based, but not all that often observed, is the Robinson R44 ZK-HWT3 (c/n 0094) belonging to Donald Irvine. It is a 1994 model which arrived here from VH land for North Shore Helicopters in October of 2002. It spent a short time with NZ Paradise Holidays Ltd of Auckland between October 2009 and mid December 2009, when it went to Don. 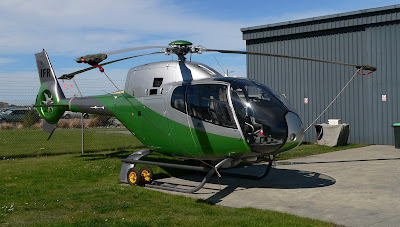 Another Christchurch local -which has just come off a major check - is the Eurocopter EC 120B Colibri ZK-IFR2 (c/n 1312). This came from South Africa and first flew in NZ on 14-12-2007. It has been listed to Wairakei Holdings since arriving here.
Posted by Dave Paull at 22:54 No comments: