Bit of a stranger ZK-SAA

Not all that common a sight at NZCH was this Cessna C208B Grand Caravan ZK-SAA (c/n 208B-0862).
This Sounds Air Travel & Tourism Ltd Cessna was in for fuel before heading down to Invercargill on Friday 29th.
Posted by Dave Paull at 19:54 1 comment:

In all her radiant splendour. ZK-CPP. 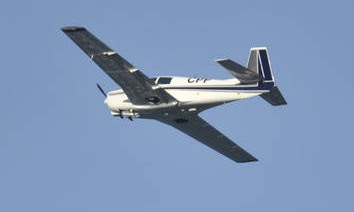 zkddg has kindly sent in these shots of Mooney M20C-3266 ZK-CPP as shot off Kaiti Hill, Gisborne today. 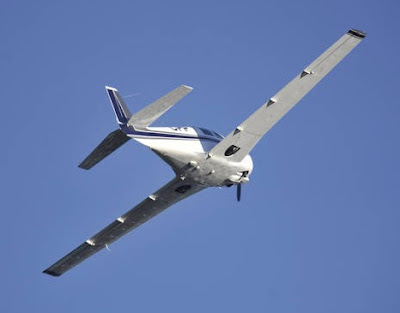 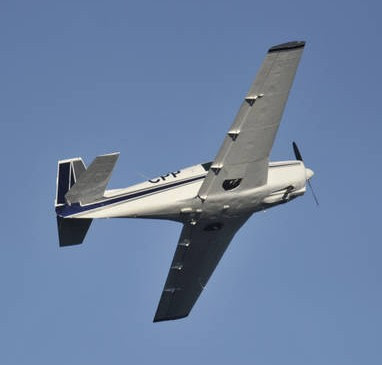 Very nice thank you.
Posted by Dave Paull at 19:08 No comments: 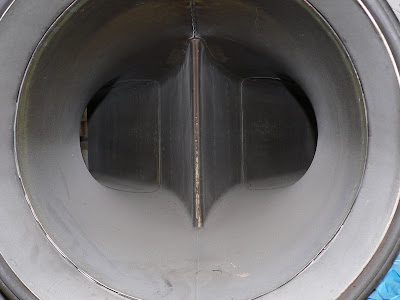 A re-run of Question time # 133 for you.
Top picture is a full view of the offending item: part of which was the initial clue.
Below is an additional clue maybe ! 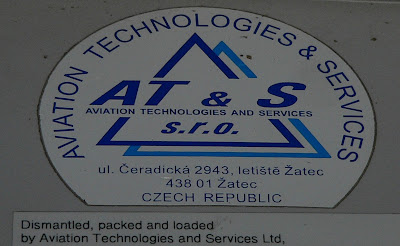 Four recent helicopter cancellations.
Below is the Robinson R22 Beta ZK-HGV3 (c/n 3735) - first registered on 13-10-2005 and delivered to NZPP on the 22nd to Rick Lucas Helicopters Ltd (Helipro). It was destroyed in a mid air collision with the Cessna 152 ZK-ETY in the Paraparaumu circuit on 16-02-2008. Its registration has now been cancelled. 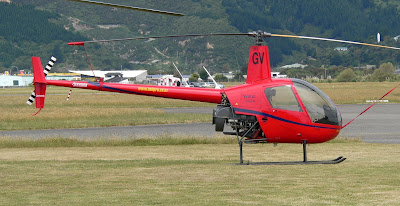 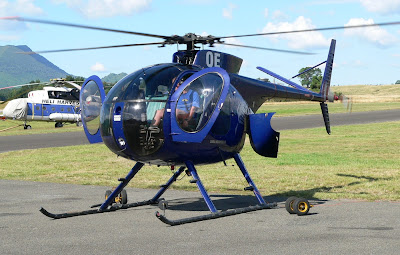 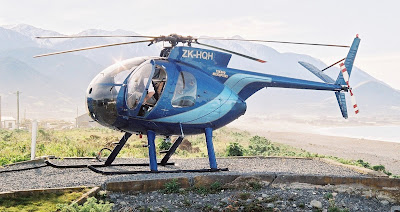 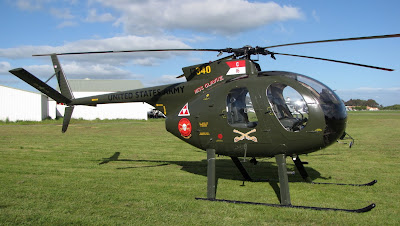 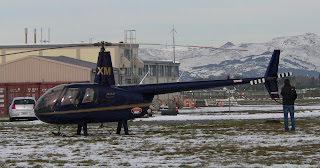 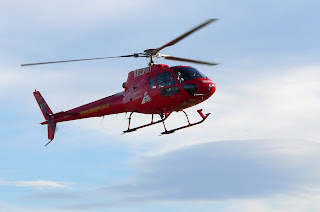 Helipro have been actively advertising over City flights to view the damage. Part of a fund raising campaign I believe. Seen hee on 28-07-2011 is Aerospatiale AS350BA ZK-HYW2 (c/n 14200 landing back from another mission. A touch of altocumulus lenticularus visible in the distance in the northwesterly flow aloft. Well done Helipro.
Posted by Dave Paull at 08:31 No comments: 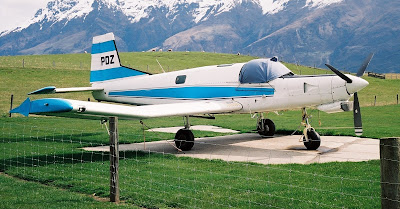 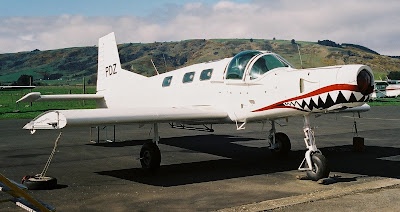 Cancelled but in good hands. ZK-CDU 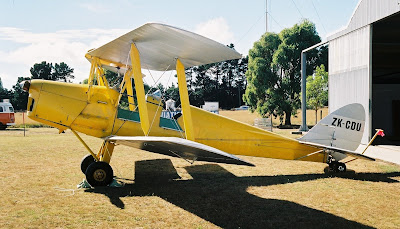 De Havilland DH82A Tiger Moth ZK-CDU (c/n 3581) was finally cancelled from the NZ Civil Aircraft Register on 25-07-2011. It was built for the Royal Air Force and issued the serial L6926. After a period on the UK civil register as G-ALAD it came to NZ and was registere as ZK-BAW on 18-11-1952. After some three years of Ag work it was withdrawn from use.  Its major components went to Charlie Liddell in 1956 and cancelled in July if 1960. It was rebuilt and re-registered as ZK-CDU on 26-11-1963. By September of 1998 it was with the Upton Family Trust who delivered it to the care of the Ashburton Aviation Museum Society Inc, with it arriving at Ashburton on 08-06-2002. 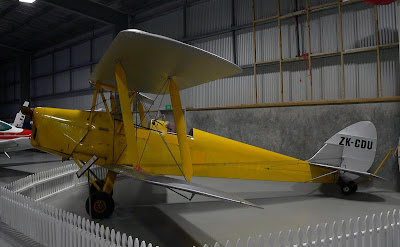 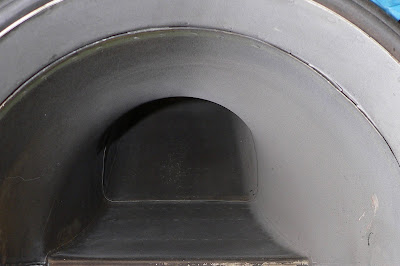 The things we do - ZK-DVM

What to do on a Snowy day !Have a play with Photo Stitch. 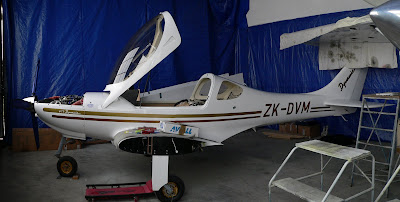 This shot shows the Aerospool Dynamic WT9 ZK-DVM (c/n DY408/2011) being assembled in the Drake Aviation hangar back on 24-06-2011.
Tucked away behind the Cessna 185 I needed three overlap shots to capture the complete aircraft
The view above is constructed from these three overlaps. Results satisfactory for me - maybe a bend in the fuselage, but certainly better than no record at all.
The aircraft goes to Stephen and Phoebe Field of Cheviot.
Sorry about bending your aeroplane Bruce.
Posted by Dave Paull at 16:06 No comments: 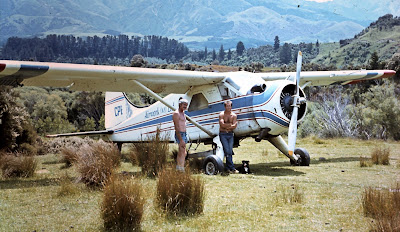 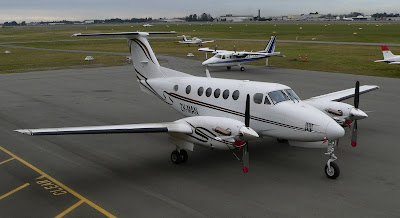 Man thats big when seen parked outside the Canterbury Aero Club hangar today. Beechcraft B200 Super King Air ZK-MAN2 (c/n BB-1366). It is listed to Tasman Helicopters Above & Beyond Ltd and is Nelson based.

Departing from Rangiora for its home at Cheviot is the Neville Somerville, Murphy Rebel ZK-VAL (c/n 408R) with a couple of gulls off to port.
Posted by Dave Paull at 20:51 No comments: 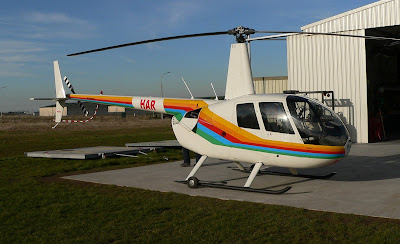 Newly registered today (22-07-2011) at Pacific Aircraft Services in Christchurch was this Robinson R44 ZK-HAR with the c/n of 0735. This was previously in Japan as JA002Y.
See link below for a photgraph of it in its Japanese markings.
http://jetphotos.net/viewphoto.php?id=6956237
This is the first allocation of these marks.
Above photo taken at Pacific Aircraft Services on 20-07-2011.
The new owner is Button Logging Ltd of R.D.2 Rangiora.
Posted by Dave Paull at 16:39 3 comments:

As previously posted, Pacific Aerospace 750XL ZK-KBD departed Hamilton for Norfolk Island 18 July and continued to Nadi the next day on its delivery to Island Hoppers.

Thanks to Noel O for coming up with http://www.helicopters.com.fj/planeTransfers.html

As an aside, ZK-KBD flew demonstrator duties to Paraparaumu based Air 2 There during October 2010.
Posted by MRCAviation at 14:28 No comments:

Sometime during the dark hours hit number 250,000 occured.
Not too bad considering the counter was only installed in about mid May of 2010.
Now if only we could score a dollar a hit....

Thank you all for your input.

Polikarpov I-16 (tip 24) no 2421014 was built in 1940 at zavod (state aircraft plant) 21 in Gor'ky (Nizhny Novgorod).
Following the collapse of the Soviet Union, its remains were discovered near Lake Yaglyayarvi (Ягляярви or, in Finnish, Ägläjärvi), Republic of Karelia, in July 1991.
The wreck was one of six remanufactured by Sir Tim Wallis and his Alpine Fighter Collection at plant no 153 at Novisibirsk.
First flown in 1997, it was crated and arrived at Wanaka in March 1998 having been registered to the AFC as ZK-JIQ on October 9, 1997.
Marked as 'red 4', it was displayed at the 1998 Warbirds over Wanaka show by Mark Hanna with the Cyrillic inscription 'For Valery'.
On November 25, 1998, the registration was cancelled when the aircraft was sold to the USA, and the aircraft was shipped from Wanaka early in 1999.
Registered as N7459 on March 4, 1999, more than a decade later, it remains part of Microsoft co-founder and Vulcan Ventures founder Paul Allen's Flying Heritage Collection at Snohomish County Airport (Paine Field), Everett, Washington (home of the Boeing wide-bodies). Registered to Vulcan Warbirds, and marked as NX7459, the I-16 flies regularly, as does most of his impressive collection. 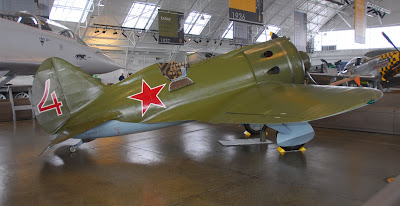 Details and photograph supplied by Jean210.
Posted by Dave Paull at 09:52 No comments:

Seen at Ashburton today (20-07-2011) was the Piper PA28-151 Cherokee Warrior ZK-TGF. It was on its delivery flight from Dunedin to its new home at Parakai by its new owner Vaughn Davis of "The Goat Farm" (hence its new registration letters). Check out www.tgf.co.nz. Also check out http://flytgf.com 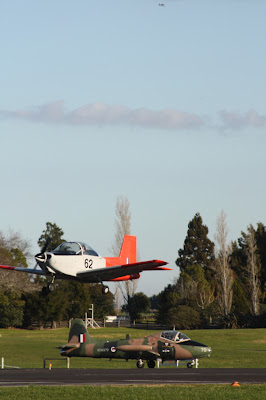 Posted by MRCAviation at 19:50 No comments: 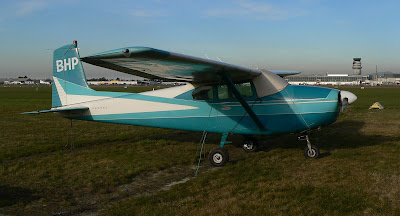 Caught in the harsh low level light of a lovely winters morn.
Pacific Aerospace 750XL ZK-KBN (c/n 176) stopped in at Christchurch briefly for fuel before heading off down to Lilybank/Tekapo for the day.
Posted by Dave Paull at 17:50 No comments:

Another gem of a winter's day greeted aviators keen to blow out the cobwebs not blown away by the storm/s that have swept the country.
Yesterday I blogged about the contrast in traffic types at Ardmore with the circuit mixed from home builts to a bizjet. Today it was rattling to the sound of its resident Strikemaster while in the grass circuit was a Piper Cub, talk about one extreme to the other!

Posted by MRCAviation at 18:17 No comments:

Outside Ardmore's Eurocopter facility 18 July was Aruban registered Eurocopter EC130 B4 P4-SDL which equates to being ex ZK-IEC cancelled from the NZCAA on 14 July as exported.
http://nzcivair.blogspot.com/2011/07/eurocopter-ec130-zk-iec.html

Unfortunately backlight prevented a nice, clear image but there has been the addition of a crest to the engine cowl with an anchor in the middle presumably indicating the helo will be housed on a floating palace.

Posted by MRCAviation at 17:44 No comments:

Another 750XL heading off?

Pacific Aerospace 750XL ZK-KBD (169) will be arriving at Norfolk Island around the time this post is made from Hamilton.  This example was first registered in September 2010 and photographed at Ardmore 23 November 2010.

From the slow-ish to fast-ish, the Ardmore circuit can sometimes be complicated with a wide range of aircraft performance limitations and today within the space of 15 minutes the airspace was graced with an Airtrainer, Airtourer, Citabria, Piper Pacer, numuerous C172's, Grumman AA1's, a real P51 Mustang and then the home built Midget Mustang ZK-AKL at the slower end of the scale and Citation 501 ZK-NDT at the faster end, the latter returning from a trip to Dunedin.

Posted by MRCAviation at 20:19 No comments:

The NZCAA register transactions earlier this month were to me at least a little confusing however seeing the latest version of ZK-HOP solved my problem!
On 07 July Bell 206B Jetranger ZK-HOP/2 underwent an identity change to ZK-IJS/2 and to facilitate this ZK-IJS/1 took up the markings ZK-HQF.  ZK-HQF was in turn cancelled once ZK-HOP/2 was re-registered and became ZK-HOP/3.  So I don't actually think the marks ZK-HQF were probably ever worn!

Posted by MRCAviation at 20:13 No comments: