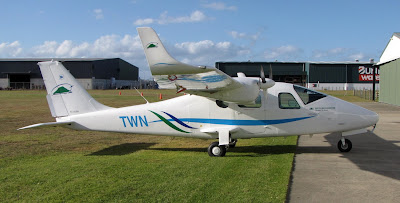 Sir Minty has provided the above photograph of the "Bay Flight Aviation" Tecnam P2006T ZK-TWN (c/n 052) taken at Tauranga on 27-01-2012.
*************
Below is a snip from the media.
Helipro purchases Bay Flight school
PostWednesday 25th Jan, 2012 | By Phillipa Yalden
Tauranga’s only flight school will re-open its doors in February under the new name Bay Flight 2012 after being purchased by Palmerston North based company Helipro.
Staff and members of the operations team are back on site at the flight school on Jean Batten Drive after the sale to Helipro was finalised last Friday.
The Helipro deal does not include the purchase of the Tecnam P2006T bought in 2011 for $700,000, but does include the purchase of Bay Flight’s 10 other aircraft.

(Title change for these ten aircraft occured on 23-01-2012. Aircraft involved are ZK-DAD, ZK-ELX, ZK-FCO, ZK-KID, ZK-MUM, ZK-NAN, ZK-PQP, ZK-SIS, ZK-SON and ZK-TWI.Added by Blue Bus).
The flight school was put into voluntary liquidation by owner, Palmerston North based pilot Steve Rowe, in December 2011.
He cited trading difficulties and a lack of flying hours due to bad weather as reasons for this move.
Director of RHB Accountants, the Tauranga based liquidator for the flight school, Tom Rodewald, says plans were finalised for the purchase at the end of last week and the flight school will officially re-open from February 1.
“Staff are on-site getting everything ready to go and they expect the students to be back in the air by first of February. It was signed and sealed at the end of last week.”
Helipro business manager John Read says Bay Flight 2012 is an opportunity to extend the company’s training platform.
“It has a very good name and part of what we do is aviation training, with rotor wing and fixed wing, and we saw this as an extension.
“We are very pleased to have bought it and to be continuing on to be able to provide students with the courses, so they can finish their qualifications.
“We have asked all the previous staff to forward their CVs and we are currently working through putting the team together now.”
Tauranga based pilot Phil Hooker, who founded Bay Flight International in 1996 and then sold it to Steve Rowe 18 months ago, is the new chief flight instructor of Bay Flight 2012.
John says a skeleton crew is working at the school at the moment, but formal operations will begin on February 1.
The Bay Flight training centre is due to reopen its doors next week.
“Doors are actually open now with a skeleton crew getting everything prepared, but the normal operations will be from February 1.
“It’s a fairly tight timeframe, but given that we are a large training organisation we have had all the necessary approvals and certifications so it’s a matter of getting it up and running.”
The sale agreement does not include the Tecnam P2006T purchased for $700,000 by Bay Flight Aviation in 2011, but does include the remaining 10 planes in the Bay Flight fleet.
John says they are expecting all of the students to continue training and will be looking to keep 15 staff in total at the Mount Maunganui base.
“They (the students) seemed very pleased when we met them and discussed the plan, we will be looking at providing a lot of backing support through our head office, as we do for our other bases.”
Helipro was established in 1983 by Wellington pilot Rick Lucas, who still owns the business.
“He started the business as one pilot and one helicopter.”
The business now operates a fleet of 40 helicopters from nine bases in New Zealand and one in Australia.
“Its been rotor wing flight training since 1983, but it got involved in fixed wing training in 1995 and we have been training in fixed wing in 2005 and has been training a large number of international students from that date.”
Bay Flight 2012 will operate under Helipro Aviation Training a NZQA accredited organisation that provides specialist aviation and flight training courses for helicopter and fixed wing aircraft.
John says flight training institutes have faced a number of challenges in the last year throughout New Zealand and Helipro are looking to move forward in the fixed wing training industry.
“We are working in a positive manner to make it a viable, ongoing business.”
Both John and owner Rick will be regular visitors to the region and are looking forward to the Classics in the Sky Tauranga City Airshow this weekend.
Posted by Dave Paull at 07:50