Returning from the Super Tourers race at Hampton Downs, I called into Ardmore (as you do), and I was surprised to see Stearman ZK-JID outside its hangar. This was the first Stearman to be registered in New Zealand I think, but it has been inactive for the last 10 years or so. Yesterday it was outside for engine runs and Len Cowper told me it will be flying soon. I only just caught it outside as it was being pushed back into the hangar. 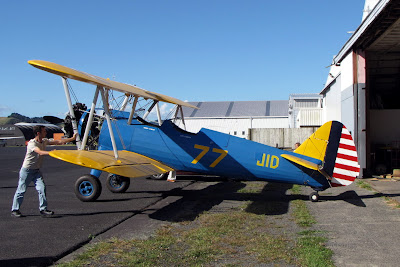 ZK-JID is an E 75 model which means that it has a Lycoming R-680-17 9 cylinder radial engine, and Len told me that the 9 cylinder motor is smoother that other radials in other Stearmans. It is ex USAAF 42-16901 which means that it was ordered in 1942. It served in the Phillipines during the war and was gifted to the Phillipine Air Force in 1946. It then went onto the Phillipine civil register as PI-C543 and later as RP-C543.
On 9/3/71 it was registered as N 4036 to Frank Jamison of Manila and it underwent a two and a half year rebuild. It was then purchased by Len Cowper who was a Cathay pacific pilot at the time as I recall. Len bought the aircraft to New Zealand where it first flew as in December 1982. It was withdrawn from use and stored in 1984 then went with Len Cowper to Hawaii from 1994 to 1996. It was then owned by Teresa Hans of Livermore, California from 12/96 to 10/98.
It was registered as ZK-JID to Pacific Southwest Ltd of Auckland (Len Cowper) on 27/11/98, and after a brief stint with White Island Airways from 25/11/99 to 1/11/00, it returned to Pacific Southwest Ltd ownership. I believe it has been stored for around the last 10 years and so it is great to see it returning to active duty.
Thanks to Bus Bus for the very detailed and interesting history of this aircraft.
Posted by Sir Minty at 21:54