14-Apr-1987
Flight Crew: Captain Craig Mossman | First Officer Lance Slight
On 14-Apr-1987 at 1421hrs, an Embraer 110P1 Bandeirante, registered ZK-FHX was approaching Palmerston North Aerodrome, New Zealand . After a routine flight from Hamilton the aircraft, operating as "Eagle 15", was on short final for runway 25 when Palmerston North Tower instructed the aircraft to "go around'.
The tower controller had noticed from a distance of 1.5 km that the aircraft's left main wheel was missing. The aircraft was flown in the local area for some 40 minutes to burn off fuel and to allow the airline to obtain advice from the aircraft's manufacturer overseas.
The crew individually briefed each passenger on the emergency and secured all loose cabin baggage. A successful wheels-up landing was then made on runway 25, using 9° of flap and with the propellers feathered. Foam had been mistakenly spread on the expected touch-down point, however due to ‘ground-effect’ the aircraft floated for some distance above the runway, coming to rest on the runway 210m from the end. The aircraft had slid for 430 m on the runway surface, almost perfectly on the runway centre-line.
There were 2 crew members and 11 passengers on board the aircraft. The occupants evacuated the aircraft by the main cabin door without injury. Smoke was observed from the left engine area and foam was applied by the aerodrome rescue fire appliances but fire did not occur.
The missing left wheel, complete with all fittings, was found four days later on farm land 4 km north-east of the aerodrome. The location was consistent with the aircraft's path on right base for runway 25.
Examination of the wheel components showed that the central retaining bolt had unscrewed from the axle, permitting separation. The threads were undamaged. Damage to the inboard sleeve of the wheel and to the mating dust seal was sufficient to suggest that the wheel bearings had been substantially loose for an appreciable number of take- off/landing cycles but probably not for the 189 cycles since the wheel was last removed for maintenance.
The tyre did not show any unusual wear patterns from wheel looseness. The bolt locking mechanism consisted of a special collar/washer and a locking pin. Two dogs on the collar/washer engaged slots in the axle when the assembly was correctly torqued up against the wheel bearings. The pin then locked the slotted bolt head to holes in the collar/washer. It was possible to assemble the collar/washer incorrectly so that the dogs butted against the end face of the axle. This defeated the locking mechanism and forward rotation the left wheel would then be able to unscrew the bolt. If the wheel had been fitted in this way, the resulting gross looseness of the wheel bearings should have made this incorrect assembly obvious to the engineer performing the task.
The wheel and fittings were reassembled on the axle to measure the engagement of the locking dogs into the axle. This was found to be 3.75 mm, a normal amount, which demonstrated that no adverse build-up of tolerances had occurred to obviate the locking mechanism. The outer bearing races were correctly seated in the wheel halves, where they had been since new. The inboard bearing inner race was a good sliding fit on the axle and showed no evidence of incorrect seating, which could have prevented engagement of the locking dogs. The edges of the slot in the bolt head bore marks, which could have been made by a screwdriver used to lever the bolt undone and also punch marks.
The right wheel bolt had similar but lesser marks. The airline's engineering section used a special socket spanner for this job so the marks should not have originated from normal maintenance. The origin of the marks could have been the previous operator of the aircraft, or possibly some unlawful interference with it before the accident. No other evidence was found to suggest that unlawful interference had taken place.
The wheel had been replaced on ZK-FHX during a Bl inspection 132.6 flying hours and 189 cycles before the accident. A B2 inspection had been carried out the previous day, six cycles before the accident but this did not require removal of the wheel. Some instances of left wheel disengagements had been reported overseas early in the service life of this aircraft type.
These had occurred at eight to eleven cycles after maintenance and were attributed to incorrect assembly. If the wheel on this aircraft had been incorrectly assembled, it was unlikely that it would have remained in place for 189 cycles. The aircraft received substantial damage, however after some repairs were made to make in Palmerston North to make it airworthy – including replacing the wheel – it was flown gear down back to Eagle’s Hamilton base.
Interestingly when the wheels are retracted in a Bandeirante – and some other types too - they sit below the fuselage line and will still rotate in the event of a wheels up.

The float was caught on camera. Look at the props – sitting perfectly! 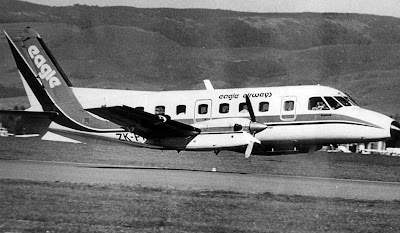 The above item was kindly sent in by Grayson O. (many thanks). 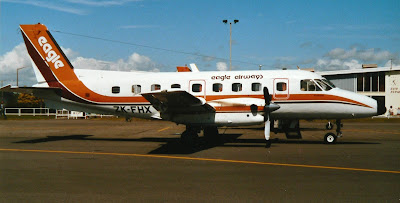 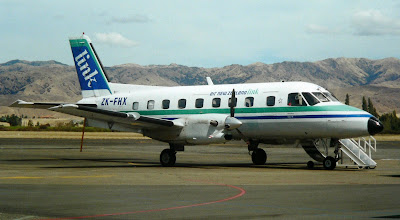 Its last revenue flight was from Whangarei to Auckland on 17-05-2002.
It ferried from Hamilton to Norfolk Island on 12-03-2003 along with two other 'Bandits' ZK-VJG and ZK-CEF2, and on to Maroochydore the next day. It became P2-ALR with Airlink Ltd at Madang and I believe it has been withdrawn from use.
Posted by Dave Paull at 16:21