How long is forever ? ZK-NMK

To me the Partenavia P68B ZK-NMK (c/n 114) seem to have been with the Canterbury Aero Club forever. It was there when I moved to Christchurch in late 1986 - and still is - or was until a few days ago.It has very recently changed hands from the Club to Trevor Lord of Partenavia Plains Ltd.
The first note I have on this airframe was of it becoming VH-IYA with Forestair at Essendon in Victoria, Australia on 13-10-1977.
A photo of it as VH-IYA is available here :- http://www.abpic.co.uk/photo/1287907/
It arrived at Ardmore on 02-02-1984 and became ZK-NMK with B F Kidd of Auckland on 19-03-1984, and was operated by East Air of Napier, Southern Cross Airways. 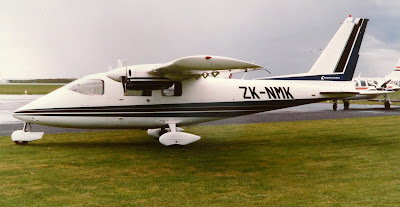 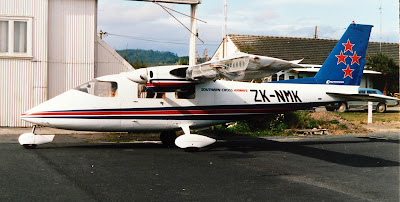 Above is a pic of her in the old Aero Club/Mount Cook hangar on 22-09-1986 already in Club markings - this is still whilst officially listed with Airwork.

It under went a major rework in 2004-2005.
The above photo was taken on 29-05-2008 showing its markings moved around and a modified paint scheme with finer NMK letters. No spats.
Below is a pic of ZK-NMK taken at Christchurch on 27-03-2012; still wearing its small Canterbury Aero Club label below the cockpit and the CAC wings behind the cockpit window. 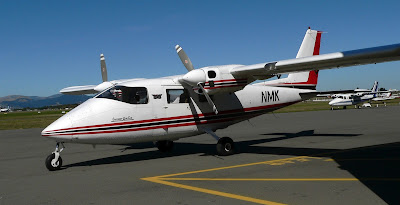 It will be kept at Chch and will retain the ‘ Canterbury ’colour scheme.
Please find attached a photo of the handover, myself at left, Jay Peters, CFI, on right 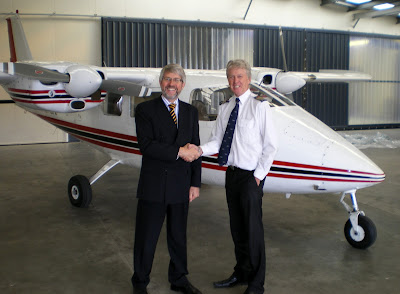 I converted to the Partenavia after learning on the Cub, with the overall intention of gaining a co-pilot rating on the DC3 (still to be completed). On the way past, I was captured by the pleasure of both planes but was impressed by the feel and stability of the P68 in the air, to the extent of being unable to resist it when it was sold.
Am embarking on a programme of TLC to get it to a standard of presentation that I feel it merits.
Posted by Dave Paull at 19:17