Another of the Mainland Air Services fleet was on public display. Above is the Cessna 152 tail dragger ZK-ETD (c/n 84195) taken on Thursday before the display was set up. It has been around since April of 1980. 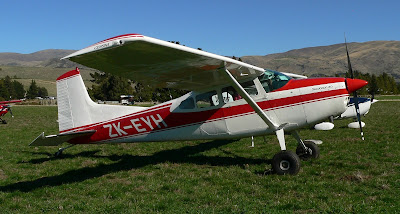 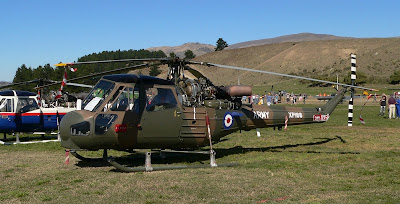 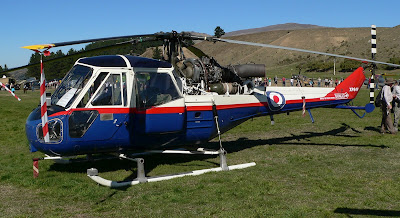 Both have been mentioned on this blog previously. See:-
http://nzcivair.blogspot.co.nz/2011/03/two-new-scouts.html
The following has been nicked from the NZ Aviation News Magazine.
Christopher Marsden of Wanaka has imported two ex military helicopters – both listed as Scout AH/1’s – but there is more to it than that. The Scout and Wasp helicopters story begins in November of 1957 when SARO (Saunders Roe) began a private venture to replace the SARO Skeeter.
Known initially as the SARO P-531, two prototypes were built using a Turbomeca Turmo 603 engine derated to 325shp, licenced built by Blackburn. The first one flew on 20-07-1958. At about this time Westland acquired SARO (who had originally taken over Cierva Autogyro and their Skeeter project in January of 1951). After further refinements, two more prototypes known as the P.531-2 were built. These were powered by the Rolls-Royce Nimbus engine (a development of the Blackburn A129) derated to 635shp. The first of these two was built at Eastleigh and registered to Saunders Roe Ltd on the Isle of Wight on 09-08-1958. It flew as G-APVL on 09-09-1959. This is the helicopter now in NZ as ZK-HJG4 and is correctly registered as a SARO P.531-2. After civilian trials; G-APVL was transferred to the military and became XP166 in March of 1960 with the Army Air Corps.

The Army Air Corps placed an order for a pre series batch of these P.531-2’s, followed by a larger order of what was to become the Westland Scout AH.1. The Royal Navy followed with an order for the Wasp which had long stroke landing gear with castoring wheels , folding rotor blades and folding rear tail boon. (it used negative rotor pitch to hold it on the ships moving deck until it was lashed down) .
On 26-02-1975, XP166 was damaged at Farnborough when flying wooden debris struck the rotor blades damaging the entire dynamic system. It was not repaired and relegated to the dump until rescued for use an as instructional airframe.

After military life it reverted to its old civilian registration of G-APVL on 05-08-2002 with Russell Dagless at Dereham and then to Christopher Marsden at Sturminster Newton on 14-06-2007. It was cancelled from the UK register on 18-08-2010 for its move to NZ. It is interesting to note that this Scout has the folding tail as fitted to the Wasp. I am wondering if this was fitted during early trials in the 1960’s or perhaps during a later rebuild.
The second Scout AH/, now ZK-HQU2 was a standard production machine and was delivered to the Army Air Corps on 20-07-1962 with the serial XP849 and is known to have served at the Empire Test Pilots School at Boscombe Downs. I believe it was written off on 03-04-1997 and reappeared in the Boscombe Museum as a composite. It joined the UK civil register as G-CBUH also on 05-08-02 with Russell Dagless. Ownership went to Christopher Marsden on 20-02-2004 and it was cancelled, also on 18-08-2010. Note that it has the small horizontal tailplane and tail skid.
Imported by Skysales Aviation (NZ) Ltd in mid 2008 the Robinson R22 Beta ZK-ISX (c/n 4320) was transferred to the P C Johnson Partnership of Kaitangata on 10-07-2008. 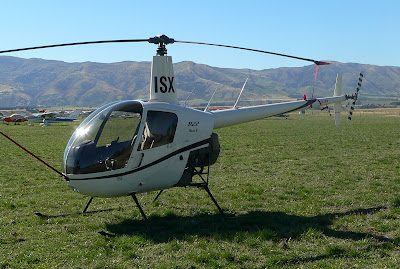