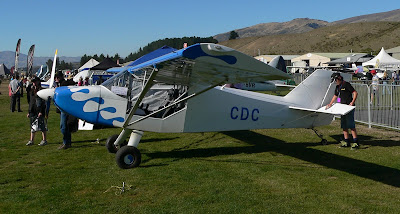 Rans S-6S Coyote 11 ZK-CDC2  (c/n 09071833-5) is one of the tidiest around. It has a Rotax 912ULS 100hp engine and a three bladed Woodcomp VP prop with a Smart Avionics CSU with reverse thrust option. As you can see it is currently a tail wheeler, but a set of amphibious floats are ready to be fitted. It has a rather different paint scheme which tend to hide the vortex generators. A 1/4 share is available if you are interested - probably Queenstown based. 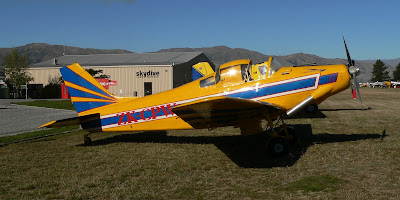 An unexpected site was Lindsay McNicol's Yeoman YA-1 Cropmaster 250R Series 1 ZK-CPW (c/n 119). I last spied this in the Ashburton Aviation Museum as an exhibit. It has recently been given a new engine and took part in the Ag display along with the Beaver, Air Tractor and Cresco. 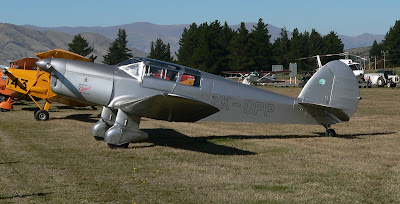 The Percival P28B Proctor1 ZK-DPP2 (c/n K305) was actually constructed by F Hills and Son for the RAF in 1939. It was purchased by Guy Clapshaw and sent down to the Croydon Aircraft Company at Mandeville for a rebuild. See previous blog at
http://nzcivair.blogspot.co.nz/2011/07/percival-zk-dpp.html

Found resting in a hangar was this Thruster Gemini 503TC ZK-EEX (c/n MAANZ/361) an Evan Gardiner project from 1986. It was acquire by Daniel Haig of Wanaka in August last. 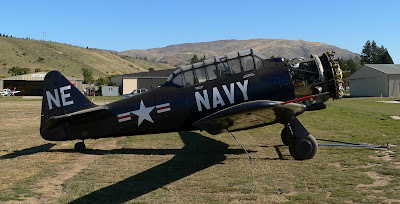 Locally based North American NA88 Harvard 111* ZK-ENE (c/n 88-14672) has been registered to Mainland Air Services (2010) Ltd of Mosgiel since December 2010. It was previously NZ1066 with the RNZAF. It sits here gathering dust, just prior to being moved around to the Mainland Air exhibition site.
Posted by Dave Paull at 22:24