Seen in front of the Auckland Aero Club's clubrooms on 21/4/12 is their second Cessna C 162 Skycatcher ZK-AMN. 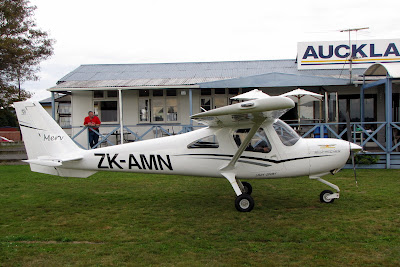 It can be seen that it wears the name Merv on the tail.  This is for the club's patron Merv North, and the registration is also in recognition of him. Now in his 80's, Merv was the first pilot to go solo with the club after flying activities re-started after World War 2, on 4 March 1946.

Merv's father was Fred North who was the chief engineer for the club in the 1930's, and who built the Tui Sports ZK-ADV see  www.nzcivair.blogspot.co.nz/2012/01/homebuilt-aircraft-at-motat.html