I remember even more.

Above is Skyliner "Blenheim" parked up at Christchurch on 17-02-1969.
It was withdrawn from use (early 1969 ?) and became VQ-FBJ on 10-06-1969 with Air Pacific.
With Fijian independence the registration was changed to DQ-FBJ in 1972.
It returned to NZ and was re-registered as ZK-AOF on 28-04-1972 - So I assume that the colour photo above, taken at Christchurch, would have been at about this time.
It was renamed Skyliner "Waitaki" and operated with NZNAC again until being withdrawn from use in December of 1974.
Below. ZK-AOF "Waitaki" as seen at Christchurch on 01-09-1972 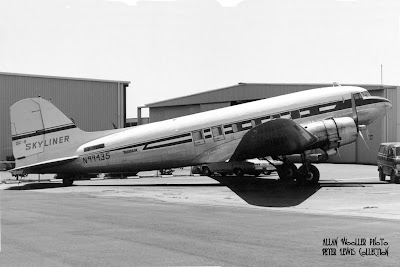 I have five US owners listed to her until about ten years later it was abandoned at Aruba in the West Indies and eventually dumped in the sea.

Check out the following two links. The first link covers all the NZ civil DC-3s and the second show "AOF" at the end of its days.