Earlier this year the Piako Gliding Club had an offer to replace their PW-5 ZK-GSN with a flasher one ZK-GWW2 (this was also based in Matamata and privately owned with David Qualtrough. This had less hours and was in a better condition). At the time Maurice Honey from the Auckland Gliding Club was looking at purchasing a PW-5 and purchased ZK-GSN. As part of the deal the Piako Club wanted the GSN rego back because they had originally been chosen in memory of the late Sandy Norman who had served the club and the NZ gliding fraternity very well over many years. (The Club originally held a christening ceremony for "SN" on 09-11-1996).

When Maurice's PW-5 GSN came in the shop for an annual inspection, the letters SN were removed from the tail fin and it was repainted as WW. Then the WW registration was masked over with a temporary vinyl SN sticker.

The glider continued to fly as GSN but was on stand-by for when Piako's GWW2 came in for its annual inspection.
When WW2 arrived a couple of months later these letters were removed and replaced with a permanent vinyl SN2 sticker. 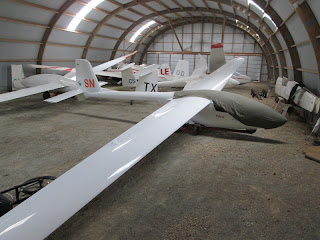 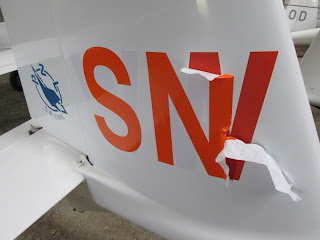 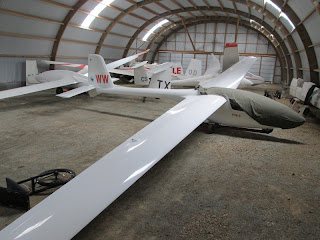 Now as ZK-GWW3.
Then Maurice's temporary SN registration was peeled off exposing the new WW3.  Also changed was the stainless steel registration plate on the instrument panel that had the same dimensions as the other one.

To handle this swap the CAA require one of the two aircraft to adopt another temporary registration. In this case ZK-GSN became ZK-GPG2 for as long as it takes to officially handle the paper work before it officially became ZK-GWW3.

Report and photographs kindly sent in by JA.