It was a spectacular year for vintage aircraft at Ardmore headlined of course by the Jerry Yagen DH 98 Mosquito KA 114 coming together, being registered ZK-MOS and being finished off just in time for the Mosquito celebration airshow on 29 September 2012.   I had been watching this aircraft in the Avspecs hangar for several years, first posting about it when Jerry Yagen's lovely DH 89 Dragon Rapide G-ADDD was completed

I salute the confidence of Warren Denholm of Avspecs to announce the date of the airshow around 6 months out, and then to complete the complex project that was the Mosquito in the nick of time - with a test flight just 3 days before the airshow!  And all this under intense international interest.  However the aircraft performed almost flawlessly for an amazing airshow that no-one who was there will ever forget.  I was amazed at how much pilots Dave Phillips and Keith Skilling threw the Mosquito around the sky with formation flying and low passes, and the sound of the twin Merlins was amazing. 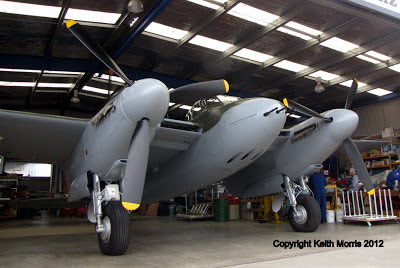 The Mosquito must be the most photographed aircraft in New Zealand aircraft history.  I took this photo in the late afternoon of 28 September, which I think was the first time that the painted engine cowlings had been attached - that's how close it was!  I posted photos from the airshow at www.nzcivair.blogspot.co.nz/2012/09/more-from-ardmore-airshow-today-2992012.html 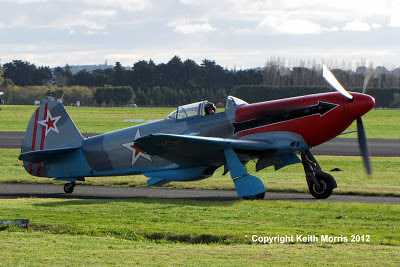 But that was not all the vintage aircraft action at Ardmore in 2012.  On 3 June 2012 NZ Warbirds staged their D Day commemoration airshow which featured the spectacular Yak 3 ZK-VVS, that was also completed in 2012.  Man! Can that thing go!  I posted about the D Day airshow at www.nzcivair.blogspot.co.nz/2012/06/warbirds-open-day-at-ardmore-today-3.html