Canadian Chris Falconar re-drew the plans for the Jodel D 11, and incorporated several changes from the D 11 to make the Falconar F 11.  He redesigned the wing with the dihedral starting further inboard, and he also altered the spar and wing rib design, and added a swept rudder. The wing could also be built in 3 parts with the outer panels hinged for transport (but this of course also added weight). The length was 6.7 metres compared to the D 11's 6.2 metres, and the wingspan was 8.3 metres compared to the D 11's 8.2 metres.  So is it a Jodel? 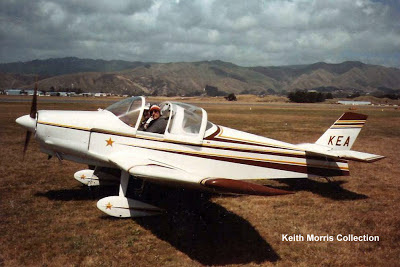 Theo Nightingall of Wellington built Falconar F 11 ZK-KEA (c/n AACA/490) as a F 11-3 with the folding wings and a sprung steel undercarriage. He built it in a large shed beside Wellington Airport so he could fold the wings and tow the aircraft to the shed through a gate in the airport fence. He also built it with a lowered turtle deck for improved rearward visibility. ZK-KEA was first registered on 19/11/82 and its first flight was on 4/12/82. It is photo'd above very early on in its life at the 1983 AACA flyin at Paraparaumu. 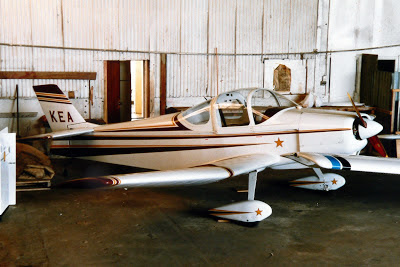 This photo of ZK-KEA was taken by Blue Bus on 16/4/84, and shows the lowered rear fuselage lines better. ZK-KEA was sold to LS and SS mabey of wellington on 24/11/86, and finally to TOR Haggett of Palmerston North, with whom it is still registered. However I suspect it may be inactive. 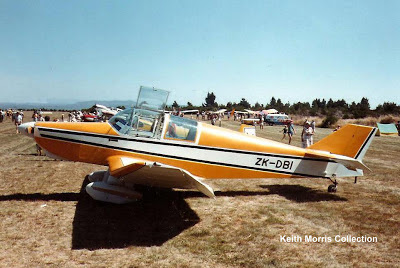 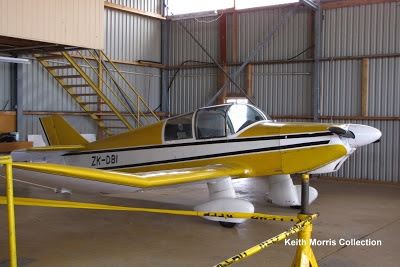 ZK-DBI was sold to ME McNutt of Waipukurau on 31/1//85, then to GP Conroy of Hastings, and then to RC Sissons of Dannevirke on 28/9/87.  It then migrated to the Canterbury area being owned by the F 12 Syndicate of Christchurch from 7/8/89 and then by the DBI Syndicate of Ashburton from 25/2/95.  It is still owned by them, but at a Christchurch address.

The above photo taken at Ashburton on 7/2 09 shows that it has hardly changed at all over its life ( I think it is still the original colour).  It also shows the Jodel DR 1051 Sicile style wheel and undercarriage fairings.

And that is the end of the Jodel D 11's of New Zealand series.  I will post about D 18's at a later date because they came along well after our D 11's.  And also there is Charlie Kenny's unique Jodel D 150X which I have posted about previously at www.nzcivair.blogspot.co.nz/2011/12/interesting-new-jodel-type-jodel-d-150x.html   I hope to post an update on this soon.
Posted by Sir Minty at 22:12