Lord Nelson has kindly sent in the following shots taken at Nelson today 28-12-2012. 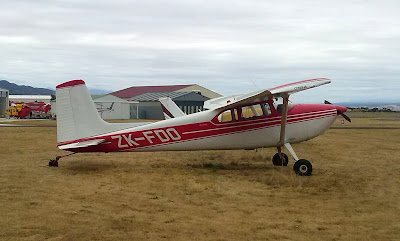 Two of a kind. Cessna 180A's.
Above is ZK-FDO2 (c/n 50017). It went new from the Cessna factory (as N9119B) to Australia and became VH-FDG with the Royal Flying Doctor Service (West Australia), Perth from 14-10-1957. On 20-12-1965 they changed the registration to VH-FDO; then sold it to private owners on 18-02-1970. It had at least nine further owners before coming to NZ to become ZK-FDO2 for H C McClellan of Queenstown. Next in line was Brian Coakley out of Cambridge from 06-03-2001. Southbridge Farm of Couts Island (northwest corner of Christchurch) are listed from 03-08-2005 and it is currently with Van Asch Grigg Partnership of Blenheim. 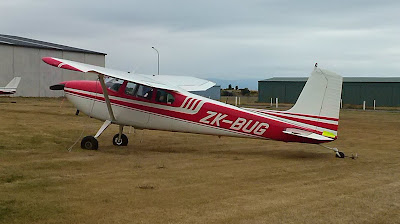 ZK-BUG c/n 32960) has been around since Adam was a cowboy. It was listed with Rural Aviation Ltd on 13-06-1957 and served in the ag role for some years. It carried the "Bugs Buggy" title whilst with Rural. It migrated to Wanganui in late November of 1965 for Dalcom Aviation Training Ltd and then to Rex Aviation (NZ) Ltd at Ardmore on 22-07-1971. After a brief period with Barr Brothers in 1971 it joined Urquhart, Gallagher and Pope before settling with Far North Aviation of Auckland from 23-11-1971. James McEwan of Auckland appears from 12-02-1985, but it it now Nelson based. 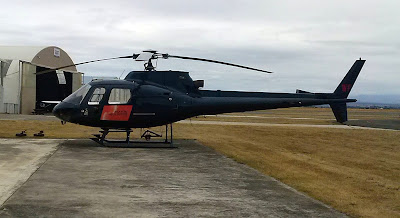 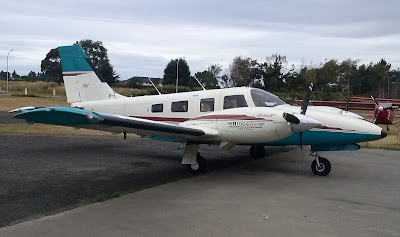 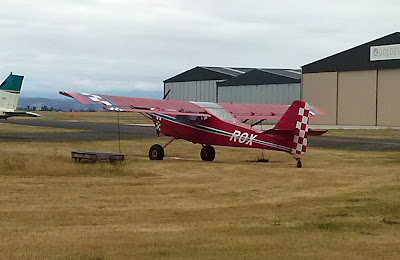 Tied down was the SkyStar Kitfox VII ZK-ROX (c/n PFA 172D-14024) of Peter Akass of Wanaka.
Below is another quote from the NZ Aviation News Magazine.
This aircraft was bought to NZ by Peter Akass from the where it had been listed with him as G-ROXY from . The first of Dan Denney’s Kitfox kits was built in 1984 in . It was a light weight, two seat aircraft with folding wings and STOL capabilities. The aircraft evolved with continued improvements up to the model 4.  SkyStar Aircraft Corp acquired the rights in June of 1992 and began developing a new aircraft, the Series 5, with certified engines, increased cockpit and baggage area. In early 2000 a group of the employees acquired the Company and continued to develop the airframe up to the series 7. Financial problems halted production in late 2005. The SkyStar assets went to John and Debra McBean in April of 2006 who trade as Kitfox LLC, they also operate Sportplane LLC which has been supplying Kitfox builders since 2003.