To complete the vintage year for vintage aircraft in New Zealand that was 2012, one more outstanding aircraft must be added: 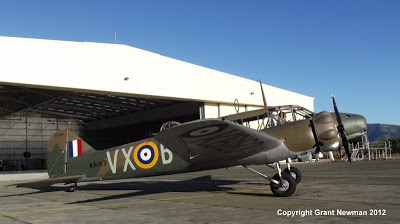 Bill and Robyn Reid's immaculate Avro Anson Mk 1 bomber ZK-RRA test flew from Nelson airport on 18 July 2012, following a 10 year restoration effort.  The Anson Mk 1 is powered by twin 350 HP Armstrong Siddeley Cheetah IX engines, and I understand that it is the only Mk 1 Anson flying in the world.

Thanks to Grant Newman of the Wings Over New Zealand website for the above photo, which was taken at Nelson on 18 July, just after the restored Anson's second flight.

So what a year 2012 has been for vintage aircraft in New Zealand!  (and remember that we are a country of just over 4 million people which is smaller that most large overseas cities).  How about this for a list of first flights during 2012?:

And to all readers of the NZ Civair blog - Happy New Year.