While travelling to Wellington for Christmas, I called into Matamata aerodrome which was very quiet on a Thursday. However I came across 2 very interesting Titan Mustangs both named "Miss ...." 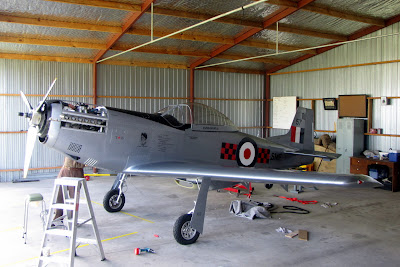 John Shuttleworth was working on his ZK-SMF which was first registered on 6/8/09 and has now flown around 10 hours. The engine is a heavily modified Mazda rotary from an RX 8 which produces around 190 HP and is I think this is the only T 51 using this type of engine in New Zealand. John is still carrying out minor tweaks and he observed that it is pioneering work all the way. 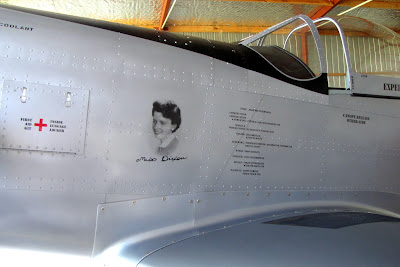 ZK-SMF is painted up in the colours of the No 3 (Canterbury) Squadron of the NZTAF and features extensive stencilling in the style of the 1950's - you can enlarge the photo to read the detail. In a really neat touch, the aircraft is named "Miss Dixon" with a 1950's photo of Miss Dixon who is now Mrs Shuttleworth. John Shuttleworth told me that both the No 3 Squadron TAF Mustangs and his future wife were very distracting to him during his student days at Lincoln! 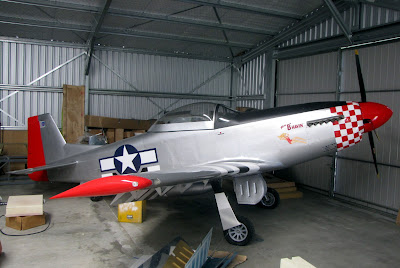 And the other "Miss Mustang" was Peter Walton's ZK-WSV which is now named "Miss B'havin" and lives in Mike Crene's Kiwi Mustangs hangar.
Mike has recently completed another T 51 Mustang ZK-WUH for an owner at Darfield, which was delivered in early December, and he is also building a Razorback B Model T 51 for himself to replace his ZK-DBG which has been sold to a buyer in America.