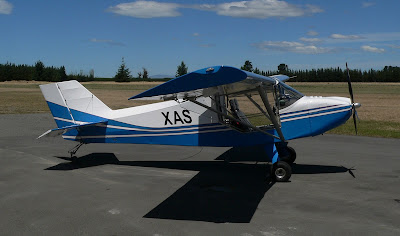 Rans S-6S Coyote 11 ZK-XAS comes on line for Corran Munro of Dunedin. It is a standard S-6S with an 80hp Rotax and an adjustable Ivo propeller. The aircraft was inspected on 22-11-09 and first flown the next day at Taieri by Craig Miller of Custom Aviation. Corran won an Evening Star flying scholarship in 1959 which lead to a PPL in March of 1960 under the eye of Hugh Skilling, followed by a CPL and twin rating with Bob Burns in 1974. This lead to some charter work with the Otago Aero Club. On December 24th 1977 Corran, Doug McCammon, Roger Barrowclough and Graeme Tikey flew the Cherokee Six ZK-EBU around NZ in one day; over water all the way, except for refueling stops at Hokitika, Kaitaia and Napier, in a record time of 15 hours and 59 minutes.
The XAS registration comes partly from a character in the book Vintners Luck and also in memory of an amazingly sociable cream Burmese cat named XAS. He loved riding in the car, would eat cherries, apricots and apples and had no hesitation in going flying. Corran was previously partners in the Druine Turbulent ZK-CGT with John Penno; Corby Starlet ZK-EEZ with David King and Pauline Hogue and in the Cherokee 140 ZK-DEJ and is in the Cherokee 235 ZK-LYC syndicate.
The above notes have been extracted from the pages of the December 2009 issue of the N.Z.Aviation News Magazine.
Posted by Dave Paull at 16:38