Following from my posting of several historic gliders at Taupo, I was interested to photograph another historic glider at Tauranga. I didn't know much about the history of ZK-GBT but it turned out to be our first post-WW2 homebuilt glider, from the era of the first Turbulents. 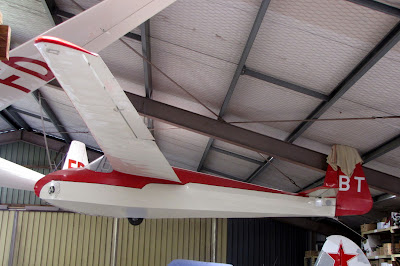 The Hall Cherokee II was designed by Stanley Hall in America, and was introduced in 1956, specifically for amatuer built construction. It had a wingspan of 40 feet, an aspect ratio of 12.8 to 1, and a glide ratio of 22 to 1.

ZK-GBT (c/n G 1) was built from a kitset by a syndicate of Auckland Gliding Club members, Henry Christie, John Williams and Trevor Taylor. Construction was commenced in March 1959 and the completed glider was registered on 7/10/60. Its first flight was at Ardmore on 25/11/61. A Gliding Kiwi article on the building of ZK-GBT was published in December 1961 and can be found at: http://vintagekiwi.gliding.co.nz/rescue/cherokee/cherokee2.htm

ZK-GBT was owned by various syndicates and owners in the Auckland area during the 1960's, 70's and 80's. It was cancelled on 4/3/92 and was donated to MOTAT. It then languished in storage eventually ending up at Waikato Polytech where faced being broken up. It was then rescued by Vintage Kiwi Gliding Club members Roger Brown, Les Riesterer and Stu Rogerson (builder of the homebuilt Duster glider ZK-GSR). Their story can be found at http://vintagekiwi.gliding.co.nz/rescue/cherokee/cherokee.htm

Since 2006 ZK-GBT has been on display at the Tauranga Classic Flyers Musem, and it now displayed hanging from the roof in an adjacent hangar.