Preceptor Ultrapups (Only One) of New Zealand

Next up in 2013 was the Preceptor Ultrapup which is a 3/4 scale two seat J 3 Cub replica that is a close cousin to the single seat Nostalgair N 3 Pup of which we have also had one registered - ZK-FSK (see: https://nzcivair.blogspot.com/2010/01/more-microlight-cub-replicas.html ).

The Ultrapup was designed by Bob Counts and was produced by Preceptor Aircraft of Rutherfordton, North Carolina from the mid 1980s to sometime in the 2000s.  Its construction is  of a welded steel fuselage and empanage with either an aluminium spar folding wing or a fixed wooden wings, and the typical engine is a VW conversion.  Its length is 16 feet 6 inches (5.03 metres), its wingspan is 30 feet 6 inches (9.30 metres) and the wing area is 120 square feet.  The empty weight is around 450 pounds (204 Kg) and MAUW in New Zealand is 1,100 pounds (498 Kg). ZK-UTP (c/n AA651-2) was built by Terry Smith of Hastings and it was first registered to him on 1/3/13. It is photo'd here on its test flight in the hands of Gerry Chisum and seems to be powered by a VW engine. 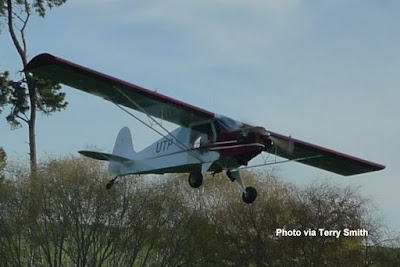 The Ultrapup is the second aircraft that Terry Smith has built, after his nice little Baby Great Lakes ZK-FLV of 1985 (see https://nzcivair.blogspot.com/2012/05/oldfield-baby-great-lakes-of-new.html ).  Interestingly it is not the last aircraft that he has built, and I am looking forward to seeing his Milholland Legal Eagle!