I have posted about the Rihn DR 107 One Design previously but I include it here as it was the next new type of sport aircraft to be registered here in 2014:
The Rihn DR 107 One Design was designed by Dan Rihn of California, who is a very experienced designer of aerobatic planes (mostly biplanes).  The design came about in 1992 as a (relatively) low cost aerobatic aircraft for aerobatic competitions, and the International Aerobatic Club created a special competition class for the (one) design.  The idea was that all competing aircraft would be essentially the same so that the best pilot (on the day) would become the winner, however the IAC class did not really progress.  The prototype first flew in August 1993 and there are now DR 107s flying in 15 countries including 11 in Australia.  The fuselage is constructed from welded 4130 steel tube and the wings are mainly wooden with plywood skins, and the aircraft is designed to withstand plus and minus 10G.  The wing is a symmetrical Wainfan airfoil with nearly full span ailerons which give a spectacular roll rate of 360 degrees per second.  It is supplied as a kit from Aircraft Spruce and Specialty Company of Corona, California.

We have had two Rihn DR 107 One Designs registered in New Zealand to date: 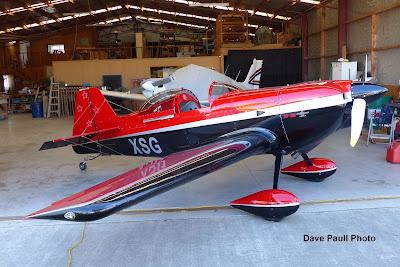 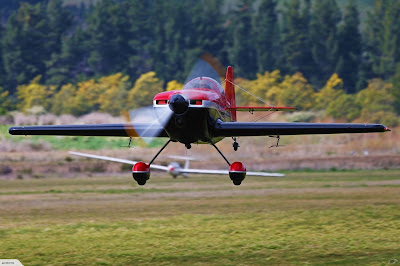 It has been for sale on Trade Me for some time, from where I got the above photo which shows the lack of dihedral and the short wingspan. 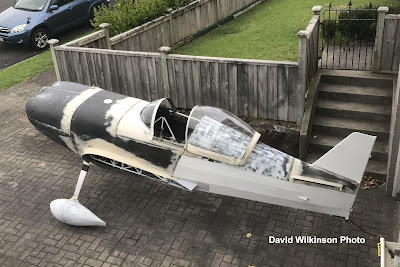 The second DR 107 to be registered here is ZK-EZG2 (c/n 14-581) which has been built by David Wilkinson and was registered to the D & N Wilkinson Family Trust of Auckland on 26/7/18.  As can be seen from the above photo the fuselage is ready for the paint shop as soon as David can get it there. 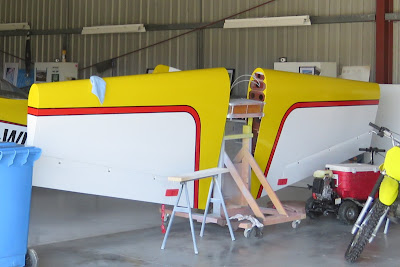 And the wings are ready to be bolted onto the fuselage at David's North Shore hangar.  As you can see ZK-EZG will wear the Wilkinson's nice fleet colours.

Thanks to David Wilkinson for the photos.