The third homegrown homebuilt aircraft to be registered at the end of 2012 was the Hansen Deuce:

John Hansen is a long time stalwart of the homebuilt aircraft movement in New Zealand, having purchased Turbulent ZK-CAX way back in 1974 and flown it all around the country (and he still owns it).  He is also a Licensed Aircraft Engineer who worked on CT 4 Airtrainers, Fletchers and the early days of the Crescos at NZAI and PAC in Hamilton.  He then set up his own business as an aircraft engineer and has worked on projects all around New Zealand and across the world.  John's background explains the immaculate work that he has done on his own design Hansen Deuce aircraft.

The genesis of John's Hansen Deuce goes back to the late 1970s when he purchased a set of plans for an American designed Bakeng Deuce, and he registered it as ZK-JFH (his initials) on 20/4/90.  However as he got into building it he realised that there were some major design faults with the aircraft so on 9/9/05 he cancelled the registration.  However, after a few years the CAA changed the regulations to allow for Experimental aircraft so John set about redesigning the Deuce using his engineering skills to improve the aircraft.  John built a whole new fuselage with wider cockpits and a bigger fin and rudder, improved the control systems and the struts, and used carbon fibre for strength in some vital areas.  The engine is a 160 HP Lycoming O-320 and it was repositioned to raise the thrust line.  In every area John built to a very high standard and after all this work the aircraft was so different that it was designated as a Hansen Deuce. 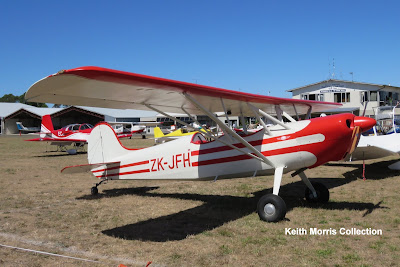 ZK-JFH (c/n AACA/586) was registered to John F Hansen of Te Awamutu on 13/12/12.  It was test flown by Noel Cruze who pronounced it to have excellent flying characteristics and a pleasure to fly.  It is photo'd above at the 2016 SAANZ flyin at Bridge Pa aerodrome, on 19/2/16 where it won the Southland Trophy for the best plans built aircraft and the John Borman Trophy for the best New Zealand designed and built aircraft.

Then at the 2017 SAANZ flyin at Ashburton John was awarded the Air New Zealand Trophy for the Grand Champion aircraft at the flyin. 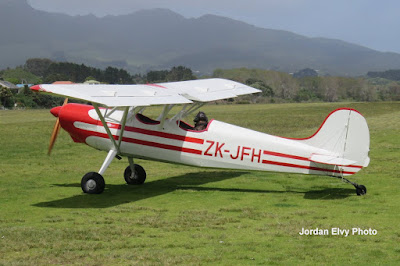 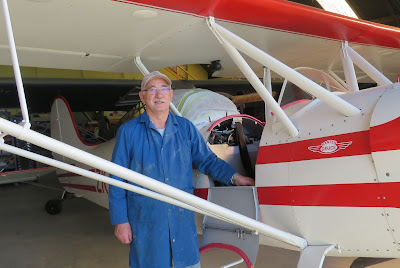 When I visited John at his nice hangar and workshop at Pokuru near Te Awamutu in November 2019 he was building a cockpit canopy for the rear cockpit (where the aircraft is flown from).  Note the nice Hansen Deuce logo (click to enlarge).