The second of three of our Homegrown Two Seat Homebuilt aircraft to be registered in late 2012:

Gavin Grimmer of Hastings had previously built his Maranda AMF-S14 D1XW ZK-JGR which he registered in March 1996, and which he powered with the first diesel engine to be used in a homebuilt aircraft in New Zealand, then a Continental O-300, finishing up with its current mogas powered Lexus V8 engine (see:  https://nzcivair.blogspot.com/2015/01/maranda-super-14s-of-new-zealand.html ).

In the early 2000s various gliding clubs around New Zealand were searching around for replacement tow planes as their old Cubs and Pawnees showed their age.  They went in several directions including upgraded Pawnees and some Rotax powered aircraft such as the Eurofox.  Gavin Grimmer reckoned he could build a good tow plane and the result was his Skylux.

The Skylux is a side by side two seater and was built with a fabric covered welded steel tube fuselage and empenage.  It uses Pawnee wings with squared wingtips and Pawnee lift struts.  It is powered by a 270 HP Lexus V8 engine conversion with an Autoflight reduction gearbox that gives a 2.2 to 1 reduction ratio to the propellor, and Gavin says that it really has a lot of get up and go.  It has flown quite a few aerotows and performs well, but has not been purchased by a gliding club. 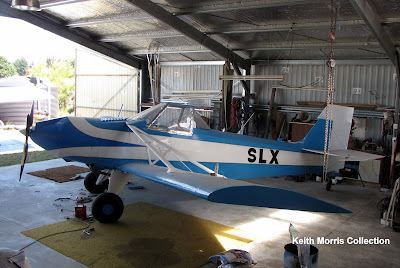 Grimmer Skylux ZK-SLX (c/n 1005-2) was registered to Gavin R Grimmer on 10/12/12.  It would be fair to say that Gavin found building his aircraft easier than getting it certified by the CAA, but eventually he got there.  The above photo was taken in Gavin's hangar adjacent to Bridge Pa aerodrome on 5/1/15, before it had flown.  It shows the wing lift strut arrangement.  ZK-SLX first flew at Bridge Pa on 1/11/15. 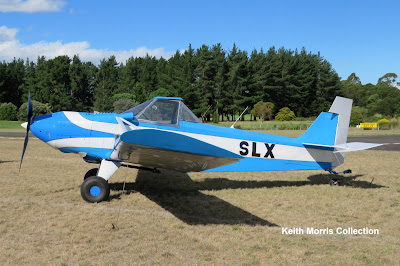 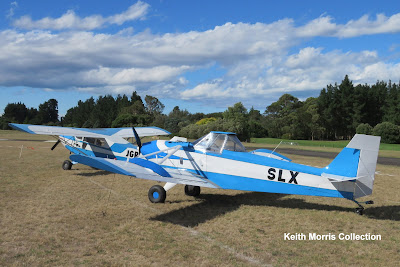 Along with Gavin's Maranda, and now fitted with wing fences.

There is a video of the Skylux taking off HERE and you can get a good idea of how the engine sounds and its performance with a climb rate of 1700 feet per minute!

Gavin also has a deep interest in finding lost New Zealand aircraft and he has a very detailed website for this at:  www.findlostaircraft.co.nz  It is well worth a look.