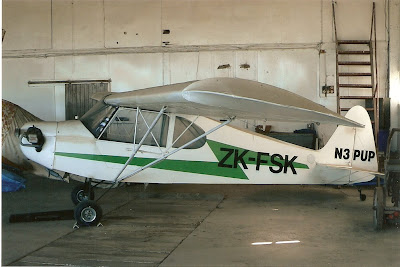 Following my previous posts on Light Miniature Aircraft Cub replicas, I thought I would fill in a bit more of the New Zealand history of some more very light Cub replicas. The first, above, is the Nostalgair N3 Pup ZK-FSK which was first registered to Steetair Aviation in Christchurch on 6/12/86. It has been owned in the Christchurch/Rangiora area ever since. It is currently owned by J I Rogers of Rangiora and it is photographed here in a hangar at Rangiora. Thanks to Blue Bus for the photo. 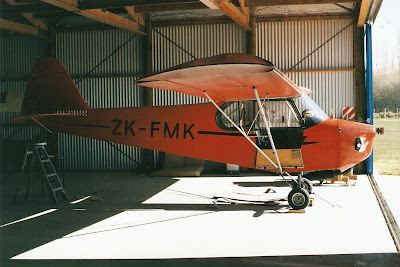 And perhaps the original replica of the bunch is this Fisher Aviation FP 202 Koala ZK-FMK, also photographed in a hangar at Rangiora. This aircraft was built by Alan Wooster in New Plymouth and was first registered on 23/6/86. It has had many owners in Taupo, Lower Hutt, Reefton, Seddon, Christchurch, North Canterbury and it is currently owned by G R McEwen of Wyndham.
The FP 202 was the first design from Fisher Aviation and featured a geodesic fuselage design which was uncommon. Fisher Aviation have since gone on to design quite a few other aircraft the most recent of which is the Fisher R 80 Tiger Moth replica. There are 11 Fisher aircraft currently registered in New Zealand.