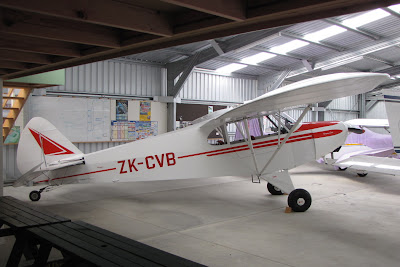 On my way back from Paihia I called into Onerahi. Nothing much was happening except the Northern Microlight Club guys were boiling the jug so I stopped for a coffee. In their hangar were 2 Technams, an Alpi 200, a Fly Synthesis Storch, and this Cub in the back of the hangar that wore a registration that I was not familiar with. I enquired about it and found to my surprise that it was a homebuilt Class 2 microlight!

ZK-CVB was built by John Belcher of Whangarei over a 12 year period and as you can see is ready for test flying. John has installed an 0-200 engine so it should go well, and he has also tried to make it look like a Cub with an authentic colour scheme (except I think that not many New Zealand Cub's wore this scheme? - it was more in the Pawnee era).

John tells me that he is interested in syndicating the aircraft so if you want to fly a microlight Cub, contact him.

I guess the registration is a Roman style version of CUB as ZK-CUB is already taken (by a LMA LM-1U Cub replica that is a smaller scale single seater).