More on the Saga of CUB's 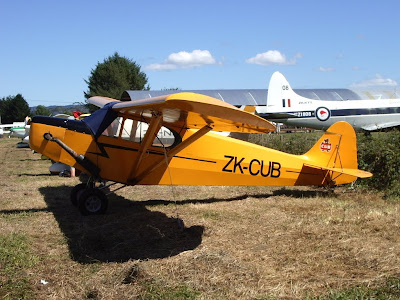 It struck me as rather ironic that as detailed in Blue Bus's post the rebuilt original Piper Cherokee was registered ZK-CUB. At least it had a Piper connotation!

Here is the second ZK-CUB which also is not a Piper Cub. It is a Light Miniature Aircraft LM-1U single seat Cub replica which I photographed at Te Kowhai in March 2005. This aircraft was originally registered as ZK-FRZ on 3/11/88 to NJ Dennison of Queenstown, and the registration was changed to ZK-CUB on 12/9/95. It has been well travelled with owners in Turangi, Wanaka, Masterton, Gisborne, Tauranga and Hamilton. I last saw it in a hangar at Te Kowhai in November 2009 looking decidedly out of square and worse for wear.

Then there is poor old ZK-CVB as I posted earlier in January, which probably really wanted to be ZK-CUB but is also not a Piper Cub although it looks just like a Piper Cub!