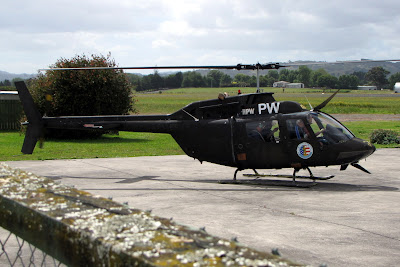 While at Ardmore on 31 December, I also photographed this interesting helicopter ZK-HPW.

I thought it was just a Jet Ranger but on checking it is actually a true ex military craft and is registered as a Bell OH-58A with a previous identity as ex MIL. It features an Army National Guard crest on the door and has the number 43 above the windscreen. It is painted overall matt black and you can still (just) see the wording "United States Army" on the tail boom - you can just see the writing if you enlarge the photograph. Unfortunately you cannot make out any serial as this would be where the registration is now painted.

Giveaway signs that it is an ex military machine are the grab rail near the rear of the skids and the two large forward protruding wire cutters at the front.

The machine was imported into New Zealand by Airwork and first registered on 27/1/97, and it was sold to Airlift Trading Ltd on 1/2/09.

Can anyone out there supply any more details of this helicopter?
Posted by Sir Minty at 15:09