A Couple of Kerikeri Locals Kerikeri Airport was very quiet when I visited on 27 December. I walked across to the homebuilders hangars on the far side of the field - there are about a dozen hangars there - but they were all shut up. You can look through the cracks in most of the hangar doors and there were a few sport aircraft that I would have liked to have photographed.

I was just walking back when Rae McNally showed up to run the motor of his Zenair CH 701 ZK-JRM so I hopped onto the back of his ute and drove back to his hangar. This was one of the planes I wanted to photograph which was great. ZK-JRM was first registered on 7/12/06. 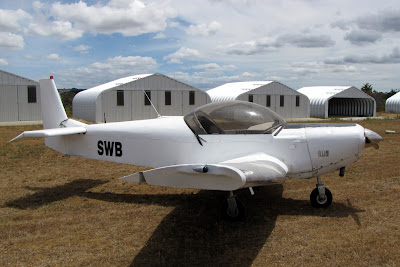 Then Fred Courtney turned up and also pulled his Zenith CH 601-HDS ZK-SWB out of the hangar for some maintenance. This is one of 2 CH 601-HDS models in New Zealand, which feature a different wing having a straight centre section and tapered outer panels with quite a bit of dihedral (New Zealand's other CH 601-HDS model is ZK-DBZ) - this produces a higher cruising speed. You can see the different shape of the wing in the photo. ZK-SWB was first registered in New Zealand on 12/1/04 and is ex N447WB.