This is probably the last post in my series of Replica Cubs in New Zealand. And these are real aeroplanes! They are Wag Aero Cuby's which are full size replicas built from original Piper plans and jigs, so you can get a completely welded fuselage for example. Wag Aero was formed by Dick Wagner in the 1960's in Lyons, Wisconsin, USA and it has expanded since then to market kit planes and sell parts for homebuilt planes from a large catalogue of supplies. Wag Aero supply the Sport Trainer kit which is based on the J3 Cub, plus the Wag-A-Bond side by side 2 seater kit and the Sportsman 2+2 4 place kit, which are also replicas of earlier Piper models. 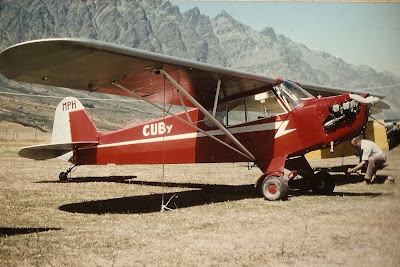 Our first Cuby Sport Trainer was ZK-MPH which was built by Darcy Hoffman in Dunedin and was first registered on 29/4/82. It was sold to HCR Campion of Dunedin on 3/5/89 and to CT Keenan of Christchurch on 2/4/96. It was cancelled on 16/2/2000 when it was sold to the UK where it was registered as G-BZHU. It is still current in the UK. It is photographed here at an AACA fly-in at Queenstown. 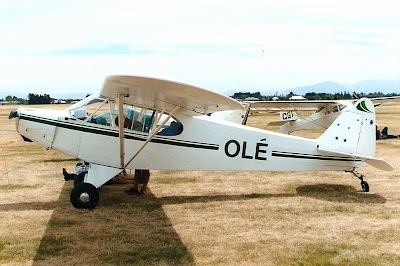 Our second Cuby is ZK-OLE which was also built in Dunedin by HJL Haugh, and was first registered on 29/4/89. It is photographed here at the SAANZ fly-in at Ashburton in February 2001. Thanks to Greybeard for the photo.
There is one more New Zealand homebuilt aeroplane that looks like a Cub replica to me, although the builder says it has very few Cub parts. This is the Westland Bush Plane which was posted by Greybeard on this blog in April 2008. You can find Greybeard's post at: http://nzcivair.blogspot.com/2008/04/westland-bush-plane.html