If you call in at Palmerston North airport, you really can't miss Dave Baldwin's acquisition. Located just between his building and the boundary fence, it's pretty near impossible to get a reasonable photo of this relic. 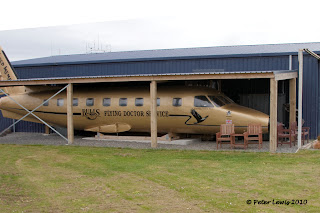 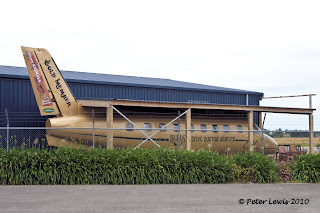 This is actually the fuselage of Embraer EMB-110P1 Bandeirante ZK-REV. This particular Bandit went to Australia in 1980 as a new aircraft, serving with Airlines of Tasmania, East Coast Commuter Airlines, Skywest Airlines and Lloyd Aviation as VH-KIR before a sojourn in PNG as P2-NAL with Nationair 1986-93.
Arriving in NZ on 9Oct1993 with 17769hrs on the clock it became ZK-REV with Rex Aviation (NZ) Ltd., Wellington 27Oct1993 and was flown in Tranzair colours on regional Ansett NZ routes as seen here at Rongotai in 1994. 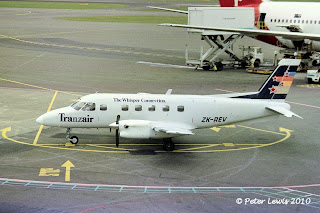 A few years later the Tranzair colours had been replaced by a more definite Ansett presence, as seen at Whangarei in 1996. 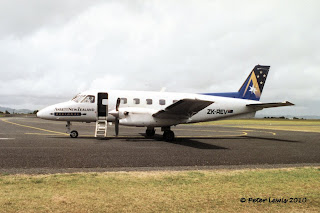 Ownership was transferred to Tasman Pacific Airlines of NZ Ltd., Christchurch 18Aug2000 and the registration was cancelled the same day. The aircraft was dismantled at Wellington with reusable spare parts reclaimed for shipment to Singapore. The fuselage went to Massey University at Palmerston North where is saw little use before passing eventually to Dr Baldwin, at Milson in 2008. Currently in use as a lunchroom/recreation area there are plans to utilize it as a hypoxia training unit.
Posted by flyernzl at 22:58