The airstrip at Turangi is a comedown from "Mangaweka International", but there is often something of interest there. 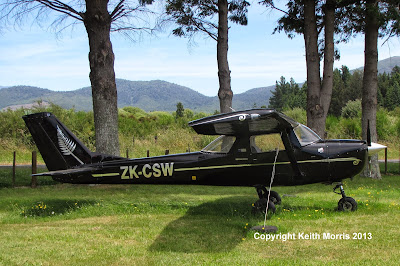 This time it was Cessna 150G ZK-CSW, "the Midnight Blowfly" which is now locally owned.  It  was used by Neville Cameron of Coromandel to fly to and from, and extensively around Australia in 2011, as chronicled in SAANZ's Sport Flying magazine.  In one article, Neville says that the aircraft was painted black because it was used for drug running from New Guinea to Cape York, and it was bought by its first New Zealand owner in an (Australian?) police auction.

Another interesting plane was in the hangar:  Vans RV 3 ZK-XRD which had a bare metal fuselage with primer on the other parts and XRD vertically up the fin.  It was originally imported for an owner in Turangi but the aircraft is currently owned by an Auckland owner.  I haven't seen any accident report for it, so what is it doing back at Turangi?