After a 33 year restororation, Ryan STM-S2 ZK-ABC, serial number 492, took to the air over Hamilton back on 16 September this year.

The following is extracted from the Wings Over NZ forum:

After a 33 year 'restoration' Ryan STM-S2 Serial No 492, ZK-ABC "Charlie" takes to the air again. Restorer and owner Noel Kruse at the controls.

Charlie served with the Netherlands East Indies Naval Air Service in Java in 1941, as S-56, and was evacuated to Australia when Japanese forces occupied the island. From 1942 to 1945 Charlie served with the Royal Australian Air Force as A50-29. Demobilised in 1946 Charlie flew with a number of Aero Clubs and private owners as VH-AHC, until he was 'retired' in 1977. In 1980 Charlie was found in a hay shed in Jerilderie NSW by Noel Kruse who started the long process of returning Charlie to flight. In 2006 Charlie and Noel moved to live in New Zealand and on 16 September 2013, 36 years since he last flew and 33 years since Noel found him, Charlie took to the air again as a genuine 'Warbird' with the New Zealand registration ZK-ABC

Ykato was in the right place at the right time earlier this week to get this bright and shiny machine on the move at Hamilton: 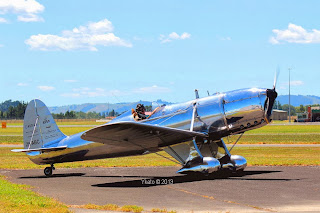 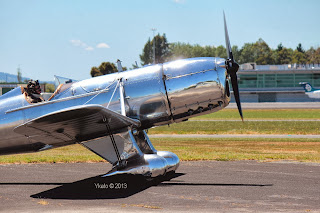