The prototype Auster J-1B Aiglet was a conversion of a stored Auster J-1 airframe (G-AJUW c/n 2634). A 130hp Gipsy Major 1 engine was installed and a larger horn balanced rudder was fitted. Including the prototype there were 87 J-1B's built with ZK-AZU being the 69th.
ZK-AZU (c/n 2752) was imported by Auster Air Services Ltd of Timaru and registered on 11-09-1952.
Photo below taken at Timaru - I believe by Des White - shows ZK-AZU with its original Auster Air Services script on its tail and before the hopper was fitted.

I believe this was the first Auster in NZ to be fitted with a hopper.
On the 4th of April 1960 ownership was changed to Aerial Sowing (Canterbury) Ltd.

The above photo was copied from a print on the wall of the Waimate Aero Club during the recent 50th anniversary fly-in during November.
It is labelled as being taken during a spray operation on the Sue Hoy property on SH1 at Willowbridge (near Waimate) about 1966.
Some time in the late 1960's it passed to H E Cederman of Timaru followed by C E Barker of Lower
Hutt.
Below is a pic - date unknown - at what looks like Omaka - I believe the pic comes from the Des White collection. 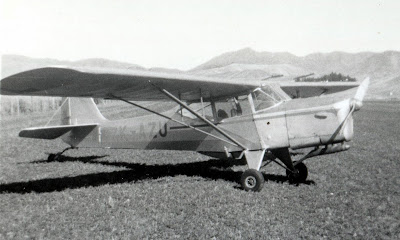 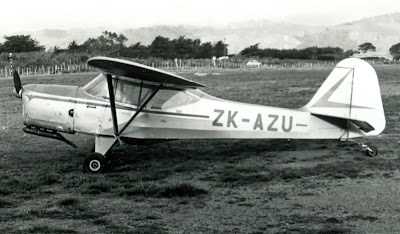 It moved back down south to Geoff Royds and A J Johnstone of Ashburton from 15-07-1970 and is seen below flying in that general area. (Photo source unknown). 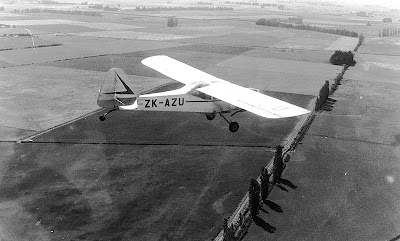 Next owners were John Richards and M Neason of Queenstown from 12-06-1974.
I believe it was damaged in a storm at Mount Cook in the mid to late 70's.
Then I lost track of her until it was cancelled on 30-05-1991.
I have a feeling it may have gone into storage with Peter
Paul Morrison at Warkworth and that parts may have been used in the rework of Auster ZK-AYO.
Anybody know for sure ?
Posted by Dave Paull at 19:13