Jogged by Blue Bus's Fourth Day of Christmas quiz question, I thought I would post about the aircraft as a preview to what we can look forward to seeing in 2016. 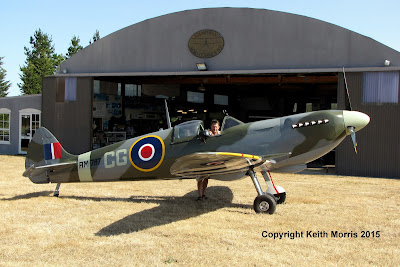 Ivan Campbell has done a magnificent job of his 90% scale Supermarine Spitfire Mk 26B ZK-CGV2 that he registered on 11/12/15.  The aircraft is photo'd above with Ivan outside his Campbell Aero Classics Loburn Abbey hangar on 8/2/15.

I have previously posted on this aircraft at http://nzcivair.blogspot.co.nz/2015/05/supermarine-spitfire-mk-26b-and-other.html .
Posted by Sir Minty at 21:26