The Edge 540 was developed by Bill Zivko and its origins go back to the Laser 200 for which Bill designed a new composite wing and which became the Edge 360.  Then in 1993 Zivko Aeronautics Inc developed a new composite fuselage which led to the development of the Edge 540.  The Edge 540 is one of the most successful of the modern day aerobatic monoplanes and it is the most common type flown in the red Bull Air Races.  It has a tremendous roll rate of 420 degrees per second and is capable of a climb rate of 3,700 feet per minute.  Power typically comes from a 6 cylinder Lycoming AEIO 540 engine producing around 340 HP.

We have had one Zivko Edge 540 registered in New Zealand. 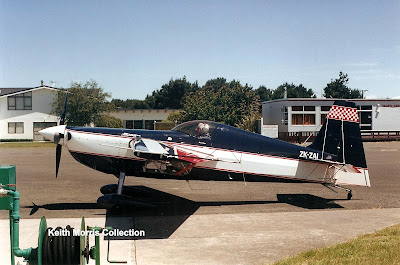 ZK-ZAI (for Zivko Aeronautics Inc I assume) (c/n 0019) was registered to the Hawker Trust (Steve Taylor) of Auckland on 25/9/98 and flew here for 10 years.  The above photo was taken at Taupo in 2000.  ZK-ZAI was cancelled from the New Zealand register on 28/10/08 when it was sold to Australia where it became VH-IIG (and is still current). 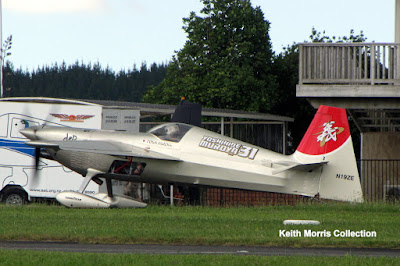 As a postscript, another Edge 540 has flown in New Zealand.  Red Bull air racer Yoshi Muroya bought his Edge 540 N19ZE to North Shore after the 2009 series to further streamline the airframe.  It is photo'd above at North Shore in December 2009.