The next type of purpose designed aerobatic monoplane to be registered in New Zealand was the Alpine Fighter Collection's Yak 50 ZK-YAC.

The Yak 50 was designed by Sergei Yakovlev in the 1970s and is a single seat aerobatic aircraft with exceptional handling and a rugged airframe (but see below).  Power was from a Vedeneyev MP 14 radial engine of typically 400 HP which gave a very good power to weight ratio.  A Yak 50 was flown to two World Aerobatic titles - in 1976 and 1982.  However, the stresses of unlimited aerobatics were such that the Russian team Yak 50s airframes were typically scrapped after about 50 flight hours, and there were numerous cases of main spar failure until modifications were made. 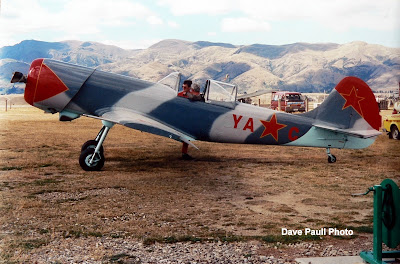 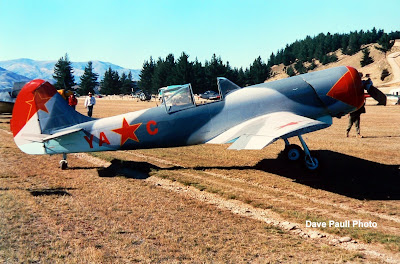 The above photo was taken at the 1998 Wings Over Wanaka airshow on 10/4/98.  ZK-YAC didn't say long in New Zealand as it was cancelled on 15/6/98 and exported to Australia and registered as VH-YAY on 18/6/98, and where it is still current with Flying Fighters Pty Ltd of Sunnybank in Queensland.