Jean210 advises us that he Northern Microlight Club held a pre-Christmas fly-in at Kaipara Flats on 17 December, an anniversary day (brothers Wright in 1903) that provided benign skies and fair winds.


Centered in and around the hangar of Tim Harrison’s Sports Aircraft New Zealand, 28 aircraft arrived by midday in an effort to secure freshly baked scones provided by Darran and Liz Price. 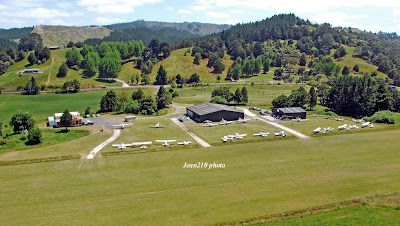 Above we see the Kaipara Flats apron. 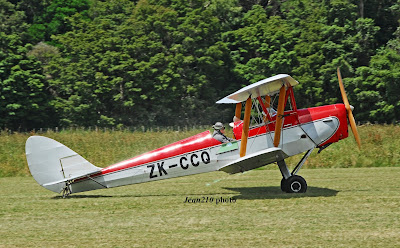 James Schmidt  trundles along in the De Havilland DH82A Tiger Moth ZK-CCQ (c/n DHNZ132).
As can be seen from its c/n it was built by De Havilland New Zealand.
It went into service with the RNZAF as NZ1452 in November of 1942 and was sold off to Tulloch Transport in August 1956 but was not registered until 13-09-1962 with P Smith, P G Whetton, A M Caudwell and R Etheridge of Blenheim. I believe it went to the sole ownership of R M Caudwell in the mid-60's and I next have it with Bindon, Philips and Tapp, from February 1968, who operated as Waikato Flying School.
Hallett M Griffin and M R Dellow of Palmerston North took it over from 09-03-1972 - followed by Hallett Griffin on his own from May 1974.
Then we see it with Nev Worsley of White Island Airways of Rotorua from late January of 1986.
Current owner Jim Schmidt appears in the papers from 30-07-1987. 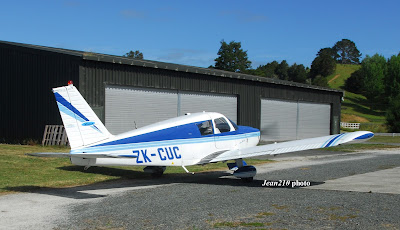 The C.U.C. Syndicate has operated the Piper PA-28-180 Cherokee C ZK-CUC (c/n 28-4257) since May of 1995 and have named it 'Chue Wunda' which can be seen on the fuselage just forward of the lower door.
She first flew in NZ on 20-12-1967 before being sent over to the Tauranga Aero Club.
They sent it on to Arthur Smith Engineering Ltd at Whangarei from 19-04-1979 before it passed to James Aviation Ltd in June 1981. They off course on sold it quickly to R E Meyers and L W Johns of Whangarei the following month. From there it joined the C.U.C.Syndicate.
Posted by Dave Paull at 20:25