I have posted previously on this blog about New Zealand's earliest Post-WW2 homebuilts in the form of Druine Turbulents and Taylor Monoplanes, but there were 3 other earlier post WW2 homebuilts, and I post them here to add to the picture of New Zealand homebuilt aircraft.

The 3 homebuilt aircraft are the Savage Special (also known as the SAS Monoplane), the Andrews A1 and the Lincoln Sports. 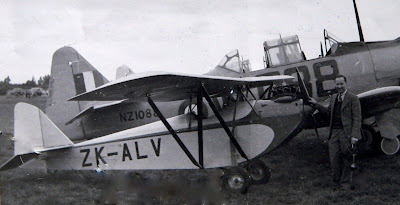 The first of these unique aircraft was the Savage Special ZK-ALV (c/n 1). The Savage Special was based on Heath Parasol design and was built by Charlie Savage, Perry Adams and Dick Shaw (hence the SAS), in Christchurch between 1933 and 1936. It had an in-line 4 cylinder Henderson motorcycle engine which developed 20 HP but was re-engined with a second Henderson motorcycle engine that was extensively modified to produce aroun 40 HP. It was flown extensively at Wigram in 1938 but was never registered at this time. It was then stored during the war.

Following the war it was taken to Harewood and given some modifications requested by the Civil Aviation branch whereupon it was given a Certificate of Airworthiness on 19/12 47 and was registered as ZL-ALV. It was sold to M F Alexander of Christchurch, then went to W Nicholson and R Jones of Timaru. ZK-ALV was cancelled on 11/3/57 after an accident which bent the crankshaft. The above photo is courtesy of Blue Bus. 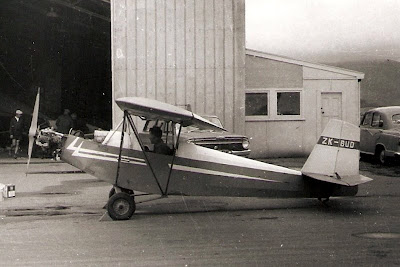 The aircraft was re-registered as ZK-BUD on 14/6/57 to R K Jones of Christchurch and another engine was installed, this time of 45 HP. It was quickly sold to K S Nicholson of Christchurch on 27/7/57 and then to Stan Smith on 28/4/58, who was living at Wellington at that time. The above photo was taken at Paraparaumu in 1965, when it flew several times. Stan later took ZK-BUD to Auckland with him where it remains stored as a future restoration project. 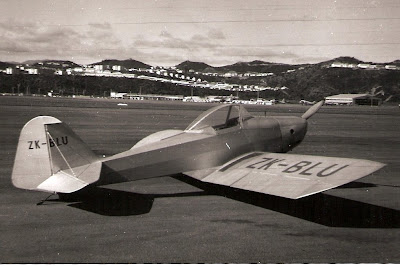 The second unique aircraft is the Andrews A 1 ZK-BLU (c/n 1) which was built by Cliif Andrews in Wellington during the late 1950's. Its first flight was on 2/10/57 and it was registered to C G Andrews and H L McGregor of Wellington in September 1955. It then was purchased outright by Cliff Andrews on 21/5/71. More details on ZK-BLU can be found at http://nzcivair.blogspot.com/2009/02/last-post-from-saanz-flyin-ashburton.html 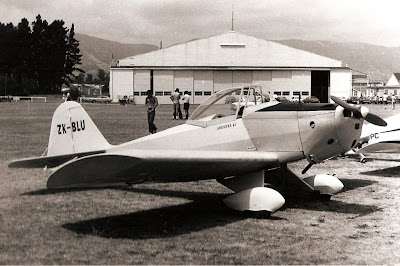 Cliff then sold ZK-BLU to Alan Rowe of Lower Hutt on 14/6/73. Alan refurbished ZK-BLU and finished it in a mainly cream colour scheme, as seen here at the 1978 AACA Flyin at Nelson. Alan flew ZK-BLU extensively and the sold it to R L Patchett of Blenhiem on 7/4/80 the to P G Alexander of Blenhiem on 7/4/83. It was dmaged in a forced landing in the Taylor River near Blenhiem on 18/12/84 but was rebuilt. It has since been sold to a succession of owners in the Blenhiem area: the A H J Gluyas and B J Peterson syndicate on 27/9/90, A H J Gluyas and S A Ruffell syndicate on 14/7/92, the Ruffel/Harris/Marshall syndicate on 13/12/94 and the Van Asch/Ruffell/Harris/Marshall and Smith syndicate on 27/6/96. It is currently owned by the Andrews Partnership of Blenhiem, and is currently registered as an Amateur Built Aircraft. 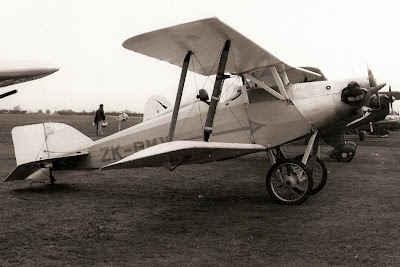 And the third unique post WW 2 homebuilt was the Lincoln Sports ZK-BMV. The history of this aircraft was posted by Blue Bus in his recent post: http://nzcivair.blogspot.com/2010/06/question-time-101-resolved.html
The above photo of ZK-BMV was taken (I think) at the 1977 AACA flyin at Masterton.