Parked on the western apron at Christchurch International 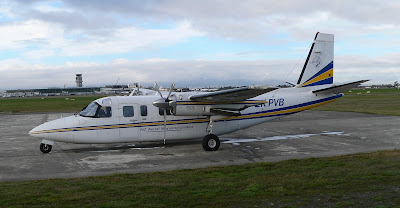 this morning was the Rockwell Commander 690A ZK-PVB , c/n 11321 , of N Z Aerial Mapping Ltd of Hastings.
Using LIDAR (Light Detection A Ranging), it is doing survey work on the lakes to the west of Christchurch.
This aircraft is surprisingly now 34 years old (older than one of todays pilots), having first appeared on the US register on 19-03-1976 as N81430 before delivery to the Australian Department of Land as VH-DLK from 17-09-76. It was later listed to the Department of Environment Heritage Aboriginal Affairs before being ferried into Auckland on 09-10-1999. It became ZK-PVB to NZAM on 18-02-00.
Why register it as ZK-PVB - Just a follow on from ZK-PVA. Absolutely nothing to do with Poly Vinyl Acetate or Butynol; but from the initial of Piet van Asch.
Have a look at :-http://www.dnzb.govt.nz/dnzb/alt_essayBody.asp?essayID=5V1
Posted by Dave Paull at 13:35