A Dull Day at Whenuapai

Along with much of the northern part of the country today, the weather at WP(MIL) was pretty marginal and depressing for most of the day today.
As I was stuck there as duty pilot for the day with not much to do, I thought you might be interested in the GA fleet now housed at Whenuapai. 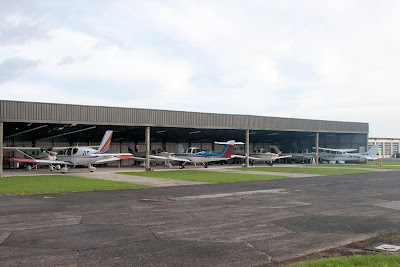 In the hangar, from the left, we start with 172M DXQ tucked inside with Socata TB 10 Tobago ZK-JIE facing it.
Next along, with its right wing just barely visible under the Tobago, is Kevin Foster's Thorp Tiger ZK-EDF.
PA28-161 Warrior II ZK-WEH is nose on to the newest local arrival, Tomahawk ZK-TWR which recently moved in from Whangarei.
The tail and cockpit cover of Dave Cogan's Vans RV 7A ZK-MIS is visible beyond the Tomahawk, cuddled up with Tomahawk ZK-EZG. Hidden behind these two and quite invisible is the RV 7A of Carl Morgan, ZK-VII.
Last in line are Tomahawk ZK-PAF and Baz Fowler's recently renovated 172N ZK-EOK. 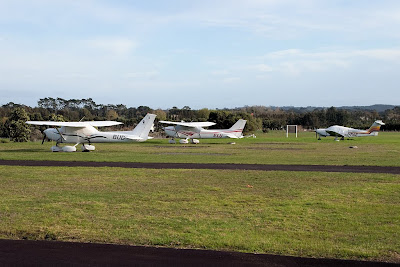 Other civil aircraft currently based at the airfield are the Parachute Club's Cessna TU206F ZK-CRW and the Gliding Club's towplane Cessna 172M ZK-DML plus their gliders Blanik MK and Astir MP.

During the day, VII departed for Wanaka, EOK for Motueka, WEH for the Barrier and BUD did one student lesson.
And I caught up on some sleep.
Posted by flyernzl at 22:10