Question time # 102 has been resolved. 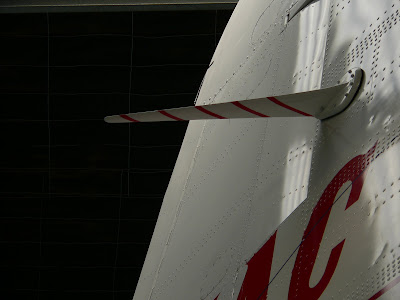 as spied at the Ferrymead Museum in Christchurch.
ZK-BRF was the third Viscount for New Zealand National Airways Corporation (NZNAC) and one of six to feature on our register. It first flew on 24-02-1959 and arrived in Christchurch on delivery on 23-03-1959. It was named "City of Christchurch" and remained in service until withdrawn on 15-07-1974, with its registration being cancelled on 29-01-1975. It was handed over to the Ferrymead Aeronautical Society on 09-04-1975 and was transported to the Museum where it can be seen t this day.
The first photo shows the position of the aerial as used in the first clue.
The second pic is a general view of the rear fuselage , and pic number three is as seen from the public viewing area with clue number two being the cockpit windows.
Brett was first in with the winning combination. He also provided a link to the Vickers Viscount. Well worth a gander at http://www.vickersviscount.net
(Click on Listings, then Aircraft Histories, then enter the registration of ZK-BRF). 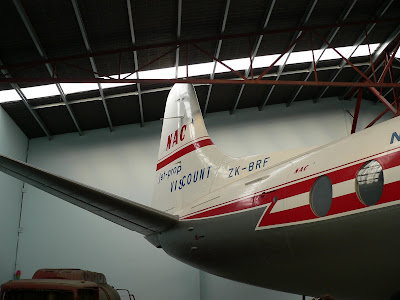 Peter Layne, our own aviation historian and author is the newsletter editor for this website. Peter got involved in this site whilst writing the NAC book. 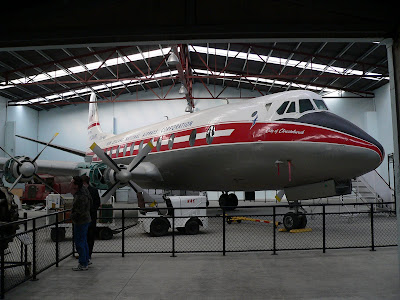 The two lower photos show ZK-BRF at Wellington Airport.
The first shot (parked on the uphill tarmac) in its earlier scheme was taken on 07-01-1964. The lower photo shows her in the "Godwit" scheme on 20-06-1972.