Question time # 99 has been answered correctly. 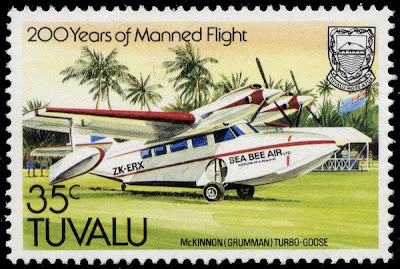 The aircraft is indeed the McKinnon G-21G Turbo Goose and the ZK-ERX registration fits nicely as well.
The person standing in the nose hatch shall remain nameless [for the moment].
And Tuvalu it indeed is.
This airframe was built for the US military as a Grumman JRF-5 Goose with the c/n of B-62. It went to the US Navy and was allocated the serial (Bu#) 37809 and was taken on charge in about May of 1944.
Post war it became N5556N briefly followed by TF-ISR2 for Flugfelag Iceland from September of 1947. The next move I have was when it went back to the USA to become N5558 with McKinnon Enterprises Inc of Sandy, Oregon in 1968. McKinnon are renown for their turboprop conversion. It was converted to the McKinnon G-21G Turbo Goose status with two P&W PT6A engines and was given a new c/n of 1205. After passing through a couple of owners it arrived in NZ on 03-05-1980 to become ZK-ERX for Sea Bee Air Ltd. It went to Tuvalu for Sea Bee Air and is known to have struck a coral head at Nui Island on 26-01-82.
There are a bunch of photos of it on google under either ZK-ERX and N77AQ and also some shots of it on http://brc58.multiply.com/photos/album/9/1979_Internal_Air_Service_-_Sea_Bee_Air
Interesting to see it on the postage stamp.
Its NZ registration was cancelled on 10-12-1984 and was shipped to the USA where it became N77AQ and served with Kalt Manufacturing and Aero Quest until being acquired by Dan Vollum of Hillsboro, Oregon in June of 1990. He also has a standard Goose and operates as Aero Planes LLC.
So well done Brett.
If you care to email me at bluebus@windowslive.co and give me your snail mail address I will forward you two chocky fish.
Posted by Dave Paull at 16:21