I have previously referred to the trio of Taylor Monos from Taranaki, but more Taylor Monos have been built in Wellington, as I detail with this post of 3 aircraft below (although only two of these flew). The other Wellington Taylors were ZK-CPC and the close cousin that I will detail in the last post of this series.

All these photos are from the Keith Morris collection, all taken by me. 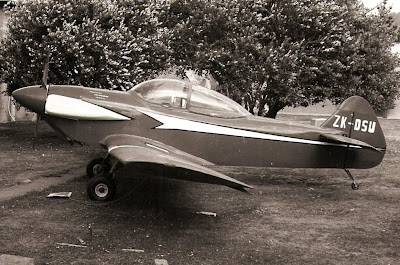 ZK-DSU (c/n AACA 178) was built over a short time at Upper Hutt in the early 1970's by Martin Gibbs, and was registered on 13/12/73. I knew Martin at this time, and he was a perfectionist who wanted to build his Taylor Mono with the nicest lines ever. Maybe he succeeded with ZK-DSU, however it was far too heavy (for example look at the canopy), so Martin broke ZK-DSU up. This photo was taken in Martin's back yard in 1973. The colour of the aircraft was red and white. ZK-DSU was cancelled on 18/9/78, however Martin's dream of building a Taylor Mono didn't die.... 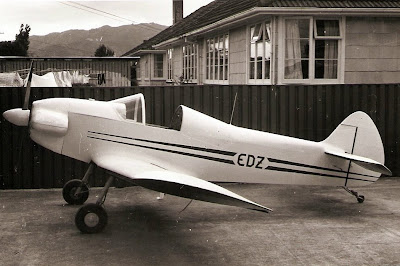 ZK-EDZ (c/n AACA 391/1) was also built over a short time by Manfred (Fred) Schaefer at Lower Hutt, and it was registered in /75. I also knew Fred at this time and he was a real nice guy, quiet and just got on with building his aeroplane. This photo was taken in Fred's driveway in 1977 with just one wing attached (that is why the fence is so close behind). Tragically, Fred was killed along with Ron Keyte on 11/3/78 when Ron's Sirocco ZK-DAF broke up in mid-air. I understand that Fred was at Masterton preparing to test fly ZK-EDZ when he went for that flight.

ZK-EDZ then languished for a long while until it resurfaced with P Francis and A Chaytor of Blenhiem in Blenhiem on 11/3/86. 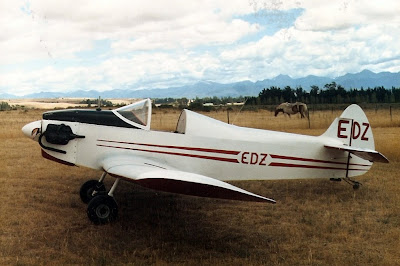 This photo of ZK-EDZ was taken at the 1987 AACA flyin at Omaka. ZK-EDZ was lost when it crashed into the sea off Gore Bay in North Canterbury on 21/2/93. I think it was returning from the 1993 AACA flyin at Rangiora to Blenhiem when the pilot became lost out to sea in fog and became disorientated. Can anyone confirm this? ZK-EDZ was cancelled on 31/3/93. 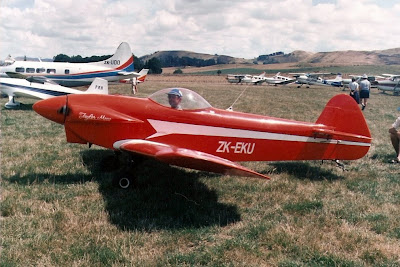 Following on from the story of Martin Gibbs and his Taylor Monoplanes, Martin continued on with his dream and built the successor to ZK-DSU as ZK-EKU (which had the registration ZK-EHD reserved for a while). ZK-EKU should be c/n AACA 178/2 (but it not recorded as this) and it was registered on 2/5/78.
This time Martin built light as can be seen in the much lighter canopy and also the one piece wing. When John Taylor first designed the Taylor Monoplane, he designed it with a 3 piece wing so that it could be built in a small space, but that meant extra weight for the metal fittings to join the wing pieces together. A lighter alternative was to build a one piece wing as can be seen on ZK-EKU - compare the wing leading edge with that of ZK-DSU and ZK-EDZ) to see the difference.
The above photo was taken at the 1990 AACA flyin at Waipukurau and shows Martin about to go flying. I do not know much about the later history of ZK-EKU but it was cancelled as withdrawn from use on 12/10/00. Can anyone add to the history of this aircraft?
Posted by Sir Minty at 21:01