Taylor Monoplanes of New Zealand (6) and a Close Cousin

We have come to the end of the Taylor Monoplanes of New Zealand. I hope you have enjoyed the series.

I finish with our most recent and also most active Taylor Mono, as well as a close cousin that was actually registered as a Taylor Monoplane in a past life.

The photos are from the Keith Morris collection and I have taken them myself unless otherwise noted. 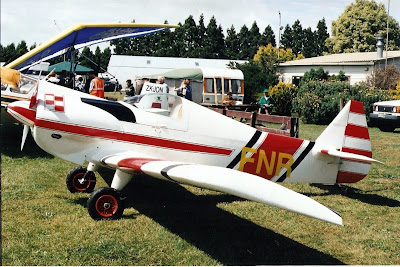 New Zealand's newest Taylor Monoplane is ZK-FNR (c/n AACA 460). ZK-FNR was built by Richard Maxwell of Cheviot and was registered on 30/3/87 and first flew in the hands of Evan Belworthy on 19/3/00, after a 23 year building period! It has extra wingspan and drooped wingtips, and also an extended fin and rudder. The engine is an 1834 cc VW conversion. Richard has flown ZK-FNR all over New Zealand and he told me that he has put in around 2,000 flight hours to date which must make it our highest hour Taylor Mono. The above photo was taken at the 2002 SAANZ flyin at Matamata and because the background is a bit cluttered, I have added a more recent photo as below. 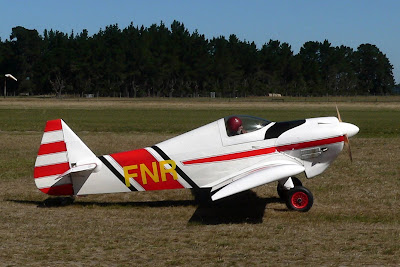 Blue Bus took this nice photo of ZK-FNR taxying at Rangiora on 9/3/10. ZK-FNR is obviously still current and is registered as a Class 1 Microlight. 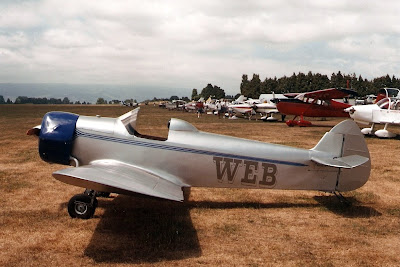 Which brings us to the close cousin of a Taylor Monoplane. ZK-WEB (c/n 001) was completed by Bernard Webb of Wellington, and officially is a Bernard Webb Spyder Mono. It was first registered on 26/8/97. However, it started off in an earlier life as a Taylor Monoplane with the reserved registration of ZK-CZV (c/n AACA 85) built at first by J S Wilkie of Inglewood. He sold the uncompleted project to A Farr of Hawera who sold it to John Skinner of Feilding in 1974. I knew John Skinner at that time and it certainly was going to be a Taylor Mono.
However Bernie Webb had other ideas and finished it with a round cowling, but still with a VW engine I think. ZK-WEB was named "Spider Webb" andf was sold to W J Southee of Waikanae on 12/1/00. It is registered as an Amateur Built Aircraft and is still current. The above photo was taken at the 1998 AACA flyin at Matamata.
Obviously, there have been other Taylor Monoplanes with reserved registrations, but I do not think any of them have ever been completed or flown. They include ZK-CVQ, ZK-CWV, ZK-CZV (see above), ZK-EHD (see my previous post on ZK-EKU), and ZK-ENR. I do think that ZK-ENR was close to being completed by Neil Robertson of Invercargill, but I do not think it ever flew - can anyone confirm that? Finally, John Best has been building a Taylor Monoplane at Blenhiem for many many years, and I understand that it is nearing completion, so we may eventually have another Taylor Monoplane to add to the list of 17 (including ZK-WEB) in future.
That is the end of the story of Taylor Monoplanes in New Zealand to date. if anyone can add any further details that would be great.