Following along from New Zealand's first post-WW2 homebuilt Turbulents, the next homebuilt aircraft type to take to the skies in New Zealand was the Taylor Monoplane.

The Taylor JT1 Monoplane was designed in England by John Taylor, who also built the first prototype, and first flew it on 4 July 1959. The original aircraft had a length of 15 feet (4.57 metres) and a wingspan of 21 feet (6.40 metres). The empty weight was 450 pounds (205 Kg) and the maximum takeoff weight was 660 pounds (300 Kg). However I think all the New Zealand examples have been built with a one bay (14 inches) fuselage stretch, and are currently approved to operate with a 340 Kg maximum takeoff weight.

All the photos are from the Keith Morris Collection, except where noted. 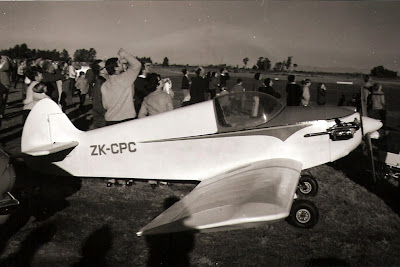 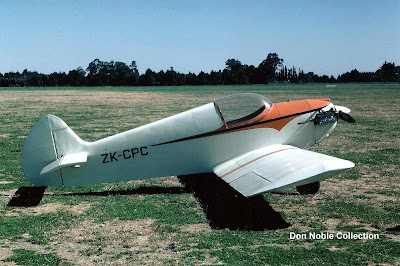 Our first Taylor Monoplane was ZK-CPC (c/n AACA/10/2) which was built by Robbie Gentry of Wellington.  (Robbie also built one of the earliest Turbulents). It was registered on 20/7/66 and its first flight was on 7/9/68. Robbie was responsible for the fuselage stretch modification, and he also modified ZK-CPC with a raised turtledeck.
I cannot remember where the above photo was taken but it was obviously at an airshow where more interesting things were happening in the sky above! (A common gripe of aircraft photographers at airshows is to get the aircraft without people standing in front of them!).
Robbie Gentry carried on building homebuilt aircraft and so the Taylor was sold to Dave Crimp of Wakefield near Nelson in 1971, where it is photo'd below on 29/1/78. 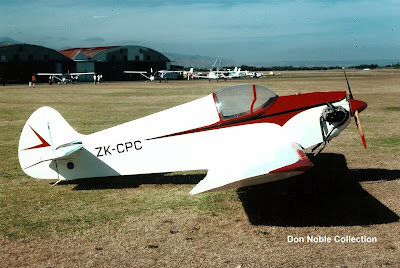 It then was owned by D P O'Rourke of Wellington, P Toms of Nelson, P JMeadows, K J Gaitley, R J Ramsbeck and J G Anderson, all in Auckland. 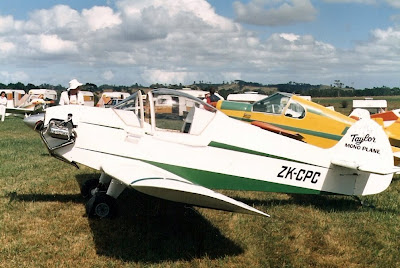 The above photo was taken at the 1988 AACA flyin at Dairy Flat. It is now owned by Steven Moore of Kaihohe. It was redesignated as a Class 1 microlight on 25/8/00 and is still current. 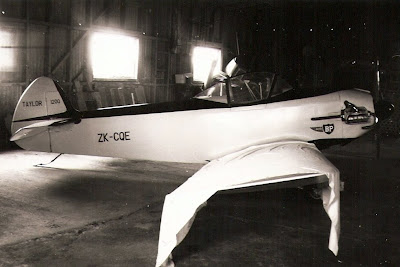 The second Taylor Monoplane to fly was ZK-CQE (c/n JF-1) which was built by Jim Fordyce of Feilding. It was registered on 20/7/66 and its first flight was on 15/10/68, very shortly after ZK-CPC had flown. This photo was taken in the old hangar at Feilding very early on in its life. 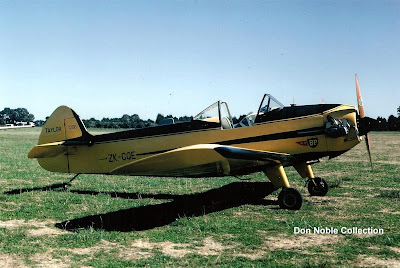 Here it is photo'd by Don Noble at an AACA flyin at Matamata on 6/3/71, now with some more black trim. 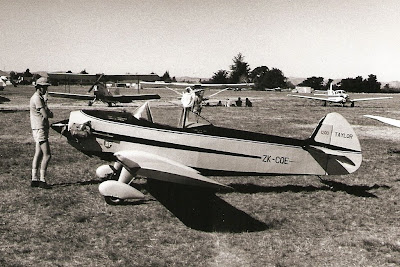 And here it is at the 1972 AACA flyin at Masterton. 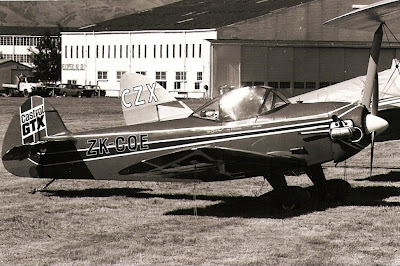 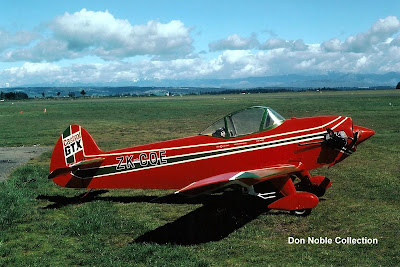 ZK-CQE was then sold to Gerry Gotlieb of Wellington in 1973, and Gerry painted it up in this green, red and white Castrol GTX colour scheme. Gerry used to do a flying display routine at airshows around New Zealand. It was damaged at Wellington in 1979. 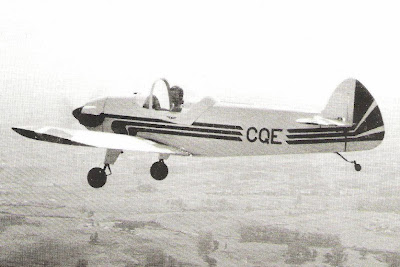 It then went to I McKenzie of Auckland and then P Liefting of Pukekohe. It was damaged again at Pukehohe and Puriri, both in October 1983, and it was cancelled on 6/4/92. 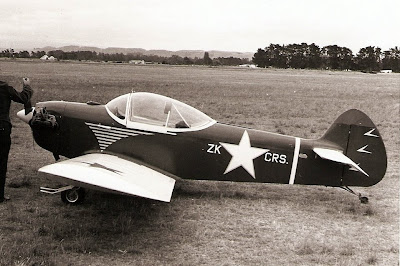 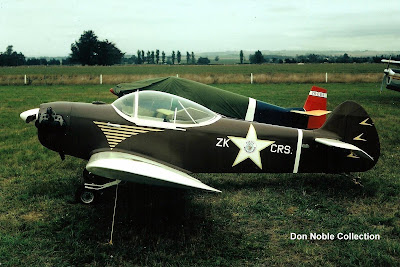 Our third Taylor Monoplane was ZK-CRS (c/n AACA 44/1) which was registered on 15/8/68 and first flew on 4/2/73. (ZK-CRS was third in registration order- ZK-CWG flew before it in February 1971). ZK-CRS was built by Clarrie Healey in Nelson and was finished in a brown and cream colour scheme. I remember that there was a bit of controversy with DCA at the time over its registration that had a star in the middle of it - how times have changed! The above photos were taken at the 1974 AACA flyin at Bridge Pa. and at the 1975 AACA flyin at Timaru. 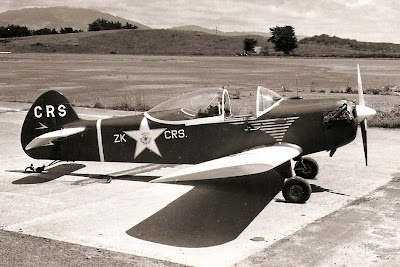 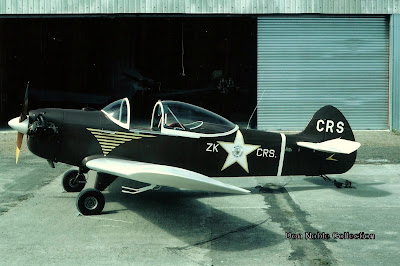 ZK-CRS was sold to Fenn Dodd of Tawa, near Wellington in 1974 and the above photos taken at Paraparaumu are when he owned it. I think he had to paint the registration separately on the tail to overcome said objection to the registration with the star! It was damaged in a heavy landing at Wairoa in January 1978 and was then sold to M C Robertson of Raumati Beach, and it was not repaired. It was cancelled on 3/2/92. 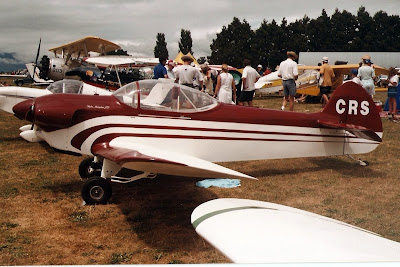