On my second visit to Ardmore for the day (!), I stumbled across AS355 Twin Squirrel ZK-HXO in the livery of its most recent operator, Rick Lucas Helicopters.

At Mechanics Bay 19Mar 2004 with Helilink/Airwork whom it operated with from its initial importation in July 2001. 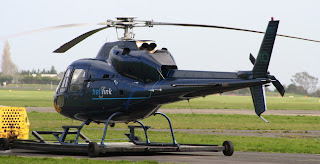 At Ardmore 28Aug 2007 looking very much like the Police "Eagle" machines with the addition of Helilink titles and a not so easy to read "XO" on the tail.