On Monday May 10th the troops went out on another mission. This time we used the Aerospatiale AS350 B2 ZK-HRM2 of The Helicopter Line Ltd from Glentanner and worked out of the Station at the northern end of Lake Heron 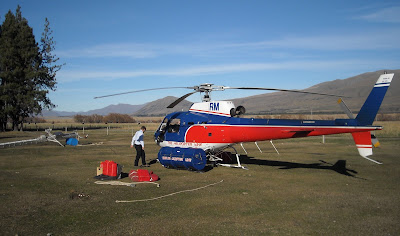 The point of the exercise was to plant another pre-assembled weather station in the high country, on a ridge to the west ofMt Medhurst and Bastion Peak, which overlook the Upper Rakaia River.
The pics show the gear being laid out ready for underslunging; and a view of the mast on short final to the already installed mounting block.
This Squirrel came from Canada in 1997 and was re-furbished by Heliquip International and registered to them on 29-07-1997 before being listed to Southern Lakes Helicopters Ltd at Te Anau on 08-05-1998. It was transferred to The Helicopter Line on 04-09-2006.
Posted by Dave Paull at 16:47