When 2 TL-3000 Class 2 Microlight aircraft ZK-SPR and ZK-SUS were registered to Sport Aircraft Ltd of North Shore on 17/5/10, I had to investigate further! It turns out the the TL-3000 is the latest aircraft to come from TL Aircraft in the Czech Republic, and ZK-SPR and ZK-SUS are airframe numbers 12 and 13. The TL-3000 follows on from the TL-2000 Sting Class 2 Microlight, of which there are 4 in New Zealand. It turned out that Sport Aircraft Ltd was formed by 4 local guys who previously all owned shares in the TL-2000 Sting ZK-STG. They were so impresssed that they became the New Zealand agents for TL aircraft! Sport Aircraft Ltd has a website: http://www.sportaircraft.co.nz/ 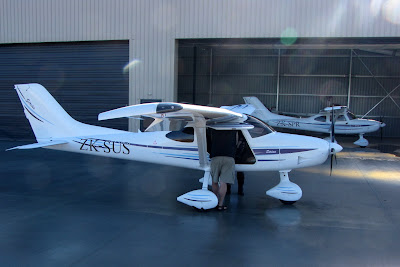 A phone call to John O'Hara came up with an invite to North Shore Airfield where ZK-SUS was due to test fly today. ZK-SUS is interesting as it is registered as a Light Sport Aircraft, and is one of the first LSA'a in New Zealand. The LSA category is a step up on the microlight catgory, and ZK-SUS is approved for a Maximum Take Off Weight of 600 Kg (as opposed to a Class 2 Microlight of 544 Kg), it is also approved for flight over built up areas, and can be used to gain flight hours for more advanced licences. However, it must be maintained by a Licensed Aircraft Maintenance Engineer (LAME). The above shot (in shadow and into the sun) shows both ZK-SUS and ZK-SPR, and you can see the top opening cabin door which makes entry impressively easy. 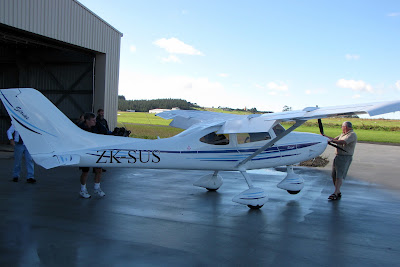 Soon ZK-SUS was pulled out into the sunlight and John O'Hara fired up the Rotax and taxied out for take-off. 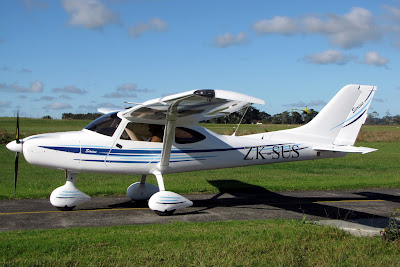 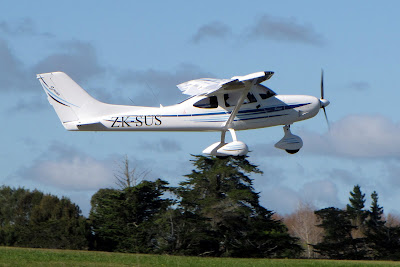 ........ And into the air for a successful first flight! It all seemed very matter-of -fact, and very smooth. ZK-SUS has been sold to Bruce Gordon of Marton, who was present to see his new baby take to the air. 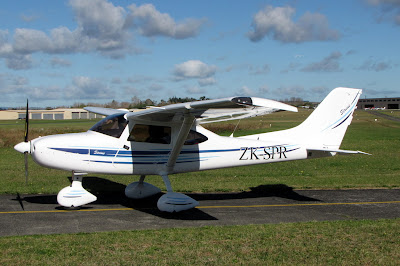 It was then ZK-SPR's turn to go. This aircraft is identical to ZK-SUS but is registered as Class 2 Microlight. Zk-SPR first flew on 19/5/10. I asked Bruce Reynolds of Sport Aircraft Ltd why the registration SPR, and he said it stands for Sports, and ZK-SUS just sounded right. 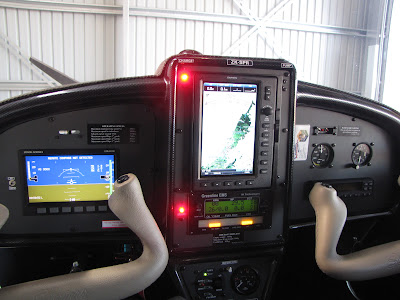 The TL-3000 is all carbon fibre construction and the finish is very impressive. The cabin is quite wide and the fitout is also impressive with a glass cockpit as shown above. It seemed like Formula 1 meets computerisation! The aircraft is also fitted with a ballistic parachute as standard. Sport Aircraft say that they have a lot of interest in the aircraft, so we can expect to see more local Sirius's in the future.
Posted by Sir Minty at 17:46